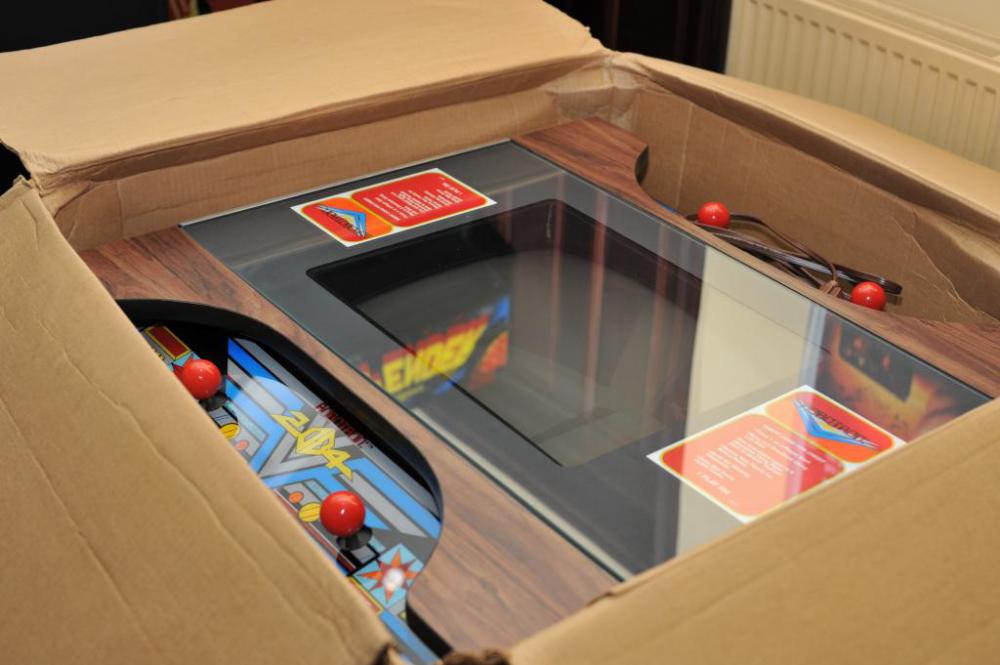 Robotron: 2084 is one of my favorite games of all time. It has the rapidly-escalating-curve-of-difficulty I prefer in arcade games — the first level is easy, the second is harder, the third is like, huh, yikes, and then by the ninth screen you need heart defibrillation. Plus, the single-screen nature of play is wonderfully claustrophic: You can't escape anywhere, so you're frantically weaving through hordes of killer robots, constantly scanning for shifting escape routes that possess pixel's-breadth tolerances.

It's pretty rare to find functioning Robotron cabinets anywhere. The last time I played one was a few years back at Yestercades in New Jersey, and I hadn't laid hands on one for a decade or more before that. I've never seen hard numbers, but my suspicion is that Robotron cabinets simply weren't made in the volume of more-common games like, say, Asteroids.

So I was fascinated to read this post about a guy who got his hands on a completely new Robotron game, never-opened and still in its original box.

From whence did such an item emerge? An even crazier story: A warehouse in Vancouver of a former 80s amusements firm, which went extinct and left behind seven stories of mint, in-the-crate arcade and pinball games.

In 2006, someone stumbled across a warehouse in Gastown, Vancouver that had effectively been sealed shut in around 1983. I'm told the place was known to collectors, but the story of new games stacked floor to ceiling was regarded as an urban legend. Some enterprising person took the initiative to find out more.

So it turned out the owner of the place was a Dale Johnson of Dale Distributing. He was one of Canada's earliest pinball and jukebox distributors and retailers, who later branched out to pool tables and video games.

Dale Distributing started out with exclusive distribution rights in Canada for Wurlitzer (the jukebox people), and several manufacturers of pinball machines, including Williams, Gottlieb and Bally. In the world of coin-operated vending, Dale was The Godfather of Vancouver: in the 60s or 70s, if you had ever put a coin into a machine for a gumball, a song, a pack of cigarettes or just about anything else, then you did business with Dale. When Wurlitzer closed for good and video games effectively replaced pinballs, he moved into that market, simply following the trend.

Inside the warehouse were discovered 7 floors of barely touched or brand new in box arcade and pinball machines dating from the mid to late 70s to early 80s. The warehouse supposedly supplied arcade machines to a chain of arcades called "Time Travel" (oh the irony).

Here are a few other lovely snapshots of the Robotron cabinet; there are many more over at The Arcade Blogger.

(Photos used with permission of The Arcade Blogger and the original photographer; a tip of the hat to Andy Baio for finding this!)

It's easy to get bored, sheltering in place, or worse, being confined to one room in your home under quarantine. I've played my fair share of video games over the past few days and, I'm sure that many of y'all have been getting down with a bit of pew-pew, too. However, don't already own a […]