10 things you’ll be surprised to learn about dinosaurs 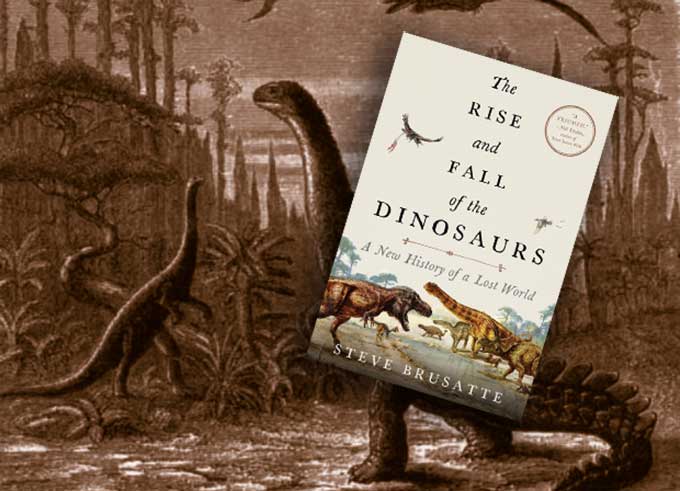 Steve Brusatte is a paleontologist at the University of Edinburgh and a specialist on the evolution of dinosaurs. He has a new book out called The Rise and Fall of the Dinosaurs. Here's a list of surprising facts about dinosaurs he wrote for Boing Boing. Enjoy -- Mark

The first dinosaurs were not brutish monsters like T. rex or earth-shakers like Brontosaurus. Dinosaurs evolved from skinny, long-limbed, cat-sized ancestors called dinosauromorphs, which lived about 250 million years ago. They were sprinters who ran around on four legs, and lived in the shadows of giant amphibians, reptiles, and mammal ancestors who dominated the food chain at the time.

After they originated, dinosaurs diversified during the Triassic Period (252-201 million years ago). Many new species evolved, but they lived in only the more humid parts of the Earth, and none of them got very big. During this time they were being eclipsed by their close cousins, the crocodile group of reptiles. There were more crocs, they lived in more places, and they were at the top of the food chain.

Saved by a mass extinction

As the Triassic Period drew to a close, the world was plunged into chaos. All of the land had been joined together into a supercontinent called Pangea. But now, Pangea began to break apart and as it did so, huge volcanoes erupted in between the fragmenting bits of crust. These eruptions caused a mass extinction—the sudden, simultaneous death of more than half of all species. The crocodile group was decimated, but dinosaurs survived, for reasons that are still unclear.

Biggest sauropods the size of a 737

After the mass extinction came the Jurassic Period—the era of dinosaur dominance. Dinosaurs spread around the world and grew to enormous sizes, none bigger than the long-necked, pot-bellied, column-limbed sauropods. The most famous sauropod is probably Brontosaurus, but the biggest ones were species like Patagotitan, Dreadnoughtus, and Argentinosaurus, which were more than 100 feet long and weighed more than 50 tons. That’s bigger than a Boeing 737!

T rex could crush through the bones of its prey

Some meat-eating dinosaurs got big too. The One True King was T. rex, which lived during the next interval of the Age of Dinosaurs, the Cretaceous Period. T. rex was the largest pure predator to ever live on land, that we know of. It was over 40 feet long, weighed between 7 and 8 tons as an adult, and had a five-foot-long skull with over 50 banana-sized teeth. These teeth were powered by huge jaw muscles, and each one could bite down with a force of over 3,000 pounds. By contrast, lions bite with a force of about 940 pounds, and humans 175 pounds. T. rex bit so hard that it shattered the bones of its prey—which is why paleontologists find chunks of bone in the coprolites (fossilized dung) left behind by T. rex.

...But it couldn’t run fast

T. rex was a supervillain, endowed with huge size, killer bite forces, a big brain, and keen senses. But there is one superpower it didn’t have: it couldn’t run. Sometimes in films T. rex is depicted as a sprinter (think of the scene in Jurassic Park where it is chasing down a jeep driving at highway speeds. Don’t believe the movie magic! Computer simulations of T. rex skeletons show that the King could only move at speeds of 10-25 miles per hour. That’s faster than we can run, but nowhere near the speed of a car or a racehorse.

Velociraptor had feathers and wings

There’s something else that the movies often get wrong. Velociraptor has become an iconic dinosaur, but it wasn’t a drab green, scale-covered, reptilian trickster like it is portrayed in Jurassic Park. The real Velociraptor was covered in feathers, and even had quill pen feathers on its arms that formed a small wing. Many other dinosaurs had feathers and wings, too. Thousands of feathered dinosaur fossils have been found in northeastern China—their feathers preserved so immaculately because the dinosaurs were buried by a volcano, Pompeii-style.

Feathered dinosaurs prove something remarkable: today’s birds evolved from dinosaurs. That makes them dinosaurs. They are merely a group of strange dinosaurs that evolved wings and developed the ability to fly, the same way bats are strange mammals that fly. This means that there are still over 10,000 species of dinosaurs in today’s world. One of the most remarkable is the bee hummingbird of Cuba, which is about two inches long and weighs about two grams (0.0044 pounds). It is the smallest dinosaur of all!

An asteroid caused volcanoes to go into overdrive

The Age of Dinosaurs ended 66 million years ago, when a six-mile-wide asteroid crashed into what is today Mexico, striking with the force of over a billion Hiroshima bombs and unleashing a torrent of earthquakes, tsunamis, and wildfires that destroyed much of the Earth. It was a bad time to be alive, and the dinosaurs couldn’t cope. New evidence suggests that the asteroid impact was even more deadly than we used to think. Around the same time the asteroid hit, lava started to spew out of huge volcanic fissures across much of India. It seems like the asteroid may have kicked these volcanoes into overdrive, compounding all of the other problems.

Within a few hundred thousand years of the extinction mammals blossomed

With extinction comes the opportunity for rebirth. As the asteroid became a distant memory and the volcanoes stopped erupting, the Earth began to heal. The climate stabilized, new plants and animals evolved, and ecosystems were rebuilt. The dinosaurs (except for birds) were gone, but other animals had taken their place: mammals. Within a few hundred thousand years of the asteroid impact, mammals had already spread around the Earth and diversified into a menagerie of species, from runners and burrowers to saber-toothed carnivores and cow-sized plant-eaters. Among these new mammals were gangly, puppy-dog-sized creatures that swung from the trees. They were the first primates—our ancestors.