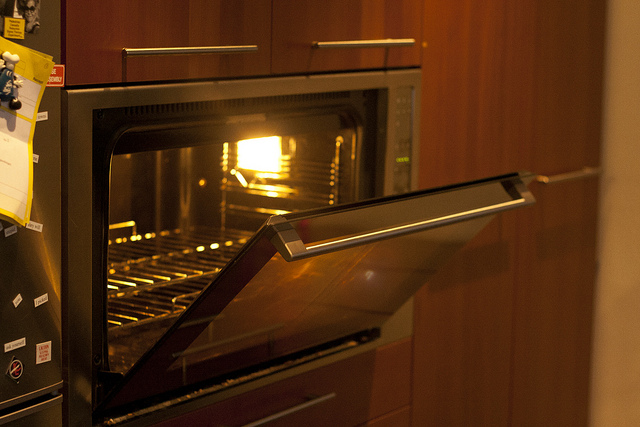 A gun-toting gentleman in Ohio wanted to keep his revolver out of harm's reach when his kids came to visit him, so he hid it in his oven's broiler. But 44-year-old Robin Garlock neglected to tell his girlfriend, who decided to do some baking later that evening. Suddenly, she heard gunfire and shouted for Garlock, thinking it was coming from outside. But no, the loud bangs were coming from inside the oven – the revolver was spinning around, firing off shots.

In the process of trying to secure the gun, Garlock forgot to put on an oven mitt and burned himself. He was also struck twice with bullets. Lucky for him he was "severely injured" but is doing okay.

According to Miami Herald:

The heat is what made the bullets explode, Mackey explained.

“Don’t store your guns anywhere that’s hot,” Mackey told Raw Story. “Don’t put your gun in an appliance. They make things for that and an oven is not one of the things.”

Mackey told the Vindicator that, though Garlock’s oven-explosion-gunfire story in Warren seemed unlikely at first, an investigation concluded that’s what happened — and the stove was riddled with bullet holes to prove it. Beyond the bullet holes, Mackey said, the gun had clearly been on fire.

How anyone could think storing a loaded gun in an oven (ovens don't have locks, not to mention how hot they get) is a good idea is beyond me. But hey, maybe gun owners should take a gun safety class before bringing a gun into their home. Just a thought.