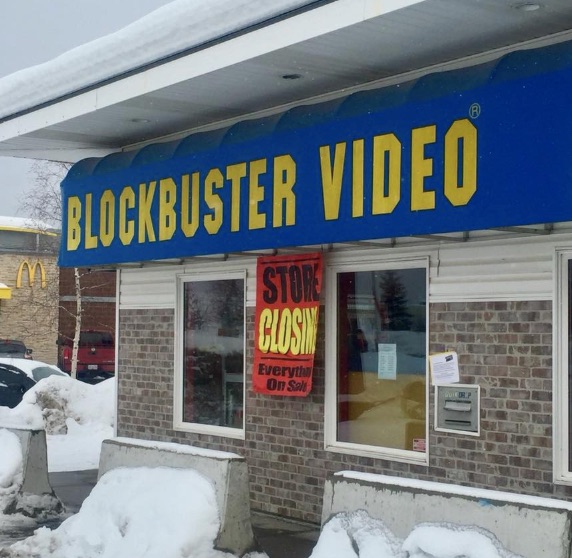 There are only three Blockbuster video rental stores left in the United States and two of them, both in Alaska, will be shuttered next month. The lone Blockbuster will be the one in Bend, Oregon. According to Kelli Vey, Blockbuster's district manager for the Fairbanks, Alaska area, the stores do get traffic but it's almost always people stopping for a nostalgic and Instagrammable moment. "I wish they would come in and buy something," she told the Anchorage Daily News:

"It's tough to tell the customers, it really is," said Kevin Daymude, the general manager at the DeBarr (Anchorage) location. "They are like family. It's hard to say goodbye."

As Blockbuster stores disappeared from most of the Lower 48 in recent years, the brand long managed to persist in Alaska. Some have said expensive internet here is one reason why...

The last locations are still making a profit, (Blockbuster Alaska stores owner Alan Payne) said Thursday, but that profit has been declining at a rapid pace.

"It's always kind of a kick in the pants every time we close a store. But it's been going on for so long that the shock has worn off, frankly," said Payne, who is based in Austin. "This is not going to come back. We can't string this out any longer without creating some financial problems."