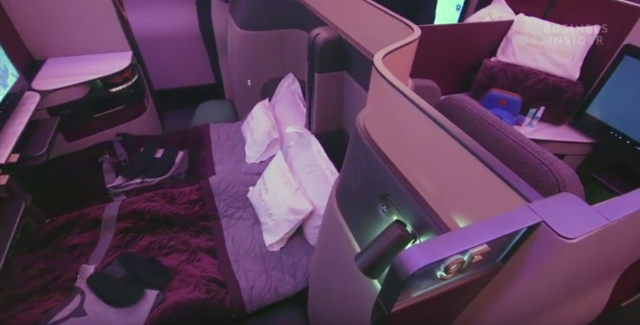 When I'm flying somewhere for work, I'm often willing to pay for an upgrade to business-class. It's not that I'm am opulent fop who deserves the best–I mean, I live in a motorhome–it's that I can't afford to lose two days of work while I'm on assignment. There;s just not enough space, with the width of my shoulders and my need to work on a laptop, to be productive when I'm seated in coach. If someone puts down their tray table? Game over: I'm stuck listening to music and fretting over the work I should be doing for the duration of my flight. Admittedly, on international flights, having the lay-flat bed that comes with a business class ticket is amazing. Arriving well rested and ready to rock is the best.

But I don't think I can get behind all the fancy that comes with a business class seat on Qatar Airways. I'd just be too frigging comfy to be productive:

That you can turn two of these business class suites together to make a double bed or combine four into a meeting room is absolutely insane. Honestly, I can't think of any business, with the exception of giving people the business, where I could afford or justify this level of luxury.