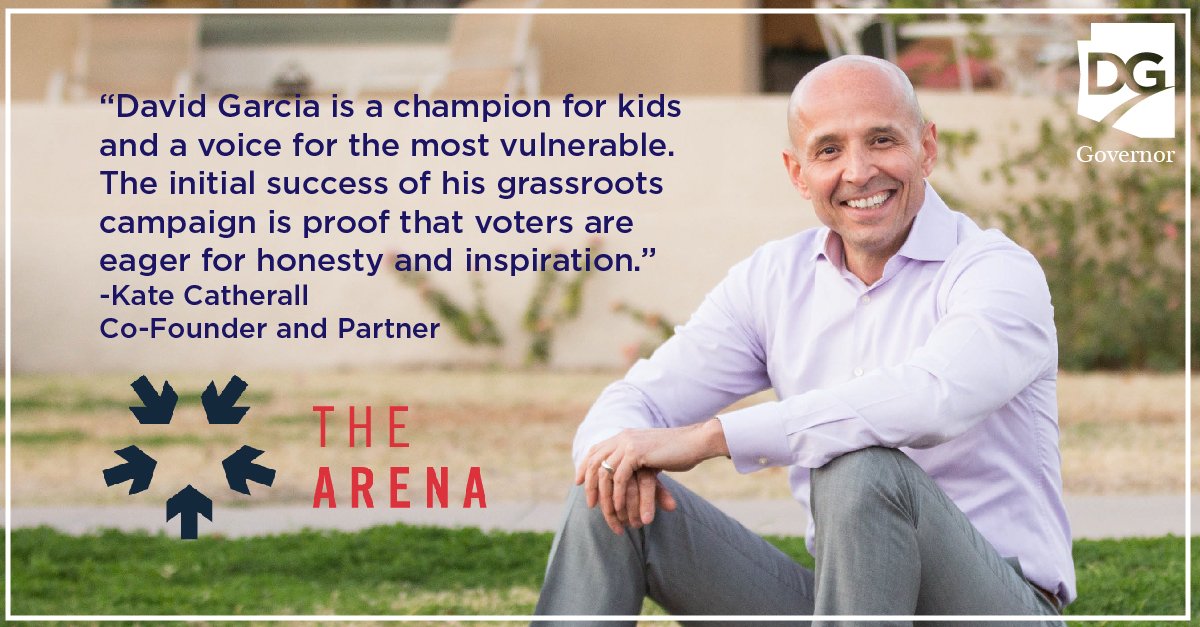 Despite being home to millions of sensible people, including a large bloc of potentially progressive Latinx voters, Arizona keeps elevating billionaire-friendly (and billionaire backed) white supremacist authoritarians to high office.

David Garcia is standing in the Democratic primaries for Arizona's upcoming gubernatorial race, refusing corporate money, and betting that he can overcome the plutocratic de facto rulers of the state and their well-funded water-carriers in the state government by campaigning for progressive policies, rather than against the state's (admittedly deplorable) Republicans.

Garcia's platform is centered on better funding for public education (Arizona was a key state in this year's nationwide teachers' uprising and the 2018 ballot will feature a binding referendum on overruling state legislators to adequately fund state schools), but also includes the standard Warren/Ocasio-Cortez/Sanders slate of policies like Medicare for All, ending dark money in political fundraising, abolishing ICE, and more.

Garcia served in the state senate's education committee, and worked for the Arizona Department of Education.

I donated $25 to his campaign.

It seems every election cycle anticipates an awakening of the so-called sleeping giant — the massive chunk of eligible Latino voters who stay home on Election Day to end Republican reign. Garcia believes the Democratic party’s Latino base has not yet been incited in part because the community has been asked to “play defense over and over and over again.” Almost every call to bring out the Latino vote has been negative, he said, because Latinos have been asked to “vote against [former Sheriff Joe] Arpaio; vote against Russell Pearce; vote against those who implemented 1070; vote against those who got rid of Mexican-American studies in Tucson,” which is a hard approach for voters to get behind. Pearce is a former state senator who was the primary sponsor of SB 1070, a controversial measure targeting undocumented immigrants.

“I believe that you’re going to see a change this time around,” he added. “And I don’t just believe it; we continue to see it in poll after poll and door-knock after door-knock. … For the first time in a long time, we’re going to give the Latino community something to vote for.” His strategy, he said, is different from a typical Democratic approach of going “to the suburban parts of the state and say ‘hey, I’m not so bad, you can vote for me for a change, the Republicans are knuckleheads’; and then sometime in August, hire a Latino vote outreach person to see if they can get a handful of Latinos to show up.” Latinos voted in unprecedented numbers in 2016, Garcia noted, but there are hundreds of thousands of Latino voters who have yet to be tapped. In 2016, for example, Hillary Clinton lost the state by just 91,000 votes, while 600,000 eligible Latino voters did not vote.

“Did You Hear Me Beat Up on Republicans Today?” — A Progressive Democrat Running for Arizona Governor Promises to Revolutionize Education [Aida Chavez/The Intercept]