Now that telcos have "abandoned rural America," the only broadband comes from cable monopolies 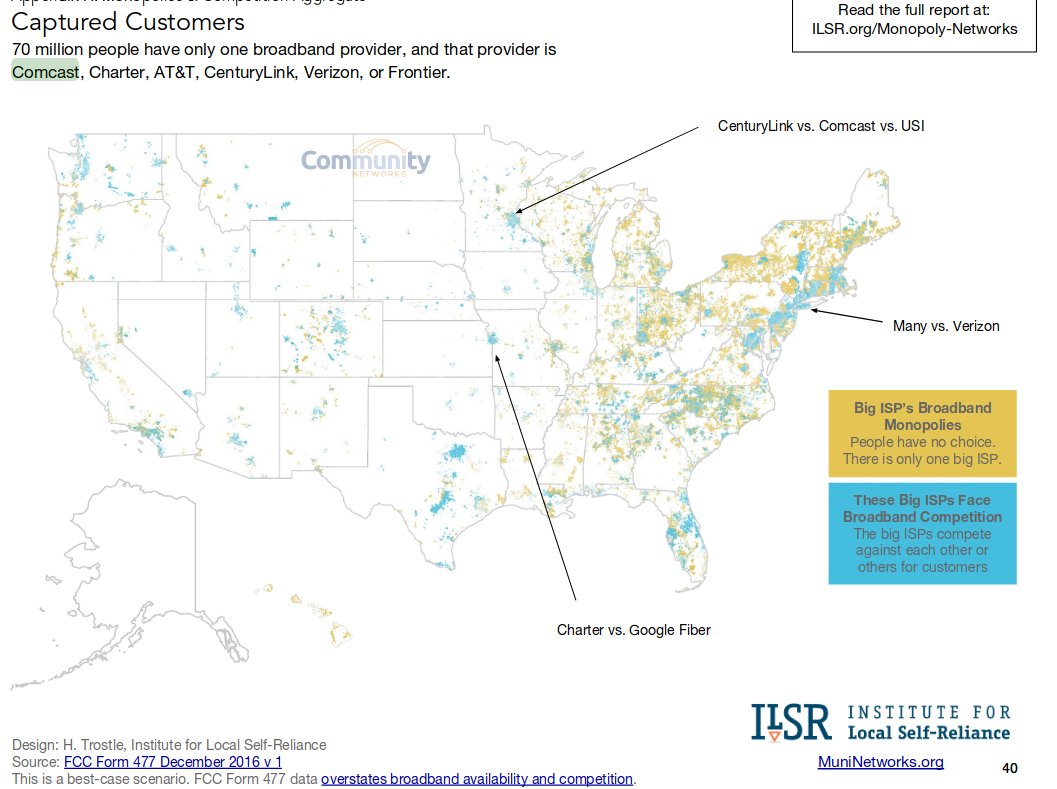 You know what's worse than shopping for your ISP in a market served by a cable/teclo duopoly? Getting your internet from a cable monopolist who faces no competition at all.

30 million Americans have only one broadband ISP: Comcast. 38 million more get to choose between Charter, and Charter.

They're overwhelmingly rural, living in markets that were "abandoned" by phone companies like AT&T, who have spectacularly failed to build the fiber infrastructure they promised, except in markets where they face competition (typically big cities).

The Institute for Local Self-Reliance (previously) details these numbers and paints a damning picture of the state of American broadband in a new report titled Profiles of Monopoly: Big Cable & Telecom, by Hannah Trostle and Christopher Mitchell, who drew on ISPs' mandatory FCC disclosures.

The broadband market is broken. Comcast and Charter maintain a monopoly over 68 million people. Some 48 million households (about 122 million people) subscribe to these cable companies, whereas the four largest telecom companies combined have far fewer subscribers — ​ only 31.6 million households (about 80.3 million people). The big telecom companies have largely abandoned rural America — their DSL networks overwhelmingly do not support broadband speeds — despite years of federal subsidies and many state grant programs. Large ISPs’ Broadband Monopoly and Competition

These are our key findings with potential for more research:

● Real Competition Drives Investment
The telecom companies have invested in Fiber-to-the-Home in areas where they face competition, which are generally more urban areas. The advent of Google Fiber in 2011 further increased the competition in urban markets. Efforts to increase investment from the largest firms in more rural areas have largely failed. Though states have varied regulations, the same trend results in every state — investment by the large ISPs is correlated to competition rather than the regulatory environment. This reality does not suggest that competition between a cable monopoly and a telephone monopoly is sufficient for high-quality Internet access, but it clearly helps to ensure connections at the minimum definition of broadband.

● Big Cable Companies Dominate
These networks are capable of delivering high-speed broadband to everyone within their service area, a legacy of the local franchising requirements that often required universal service or at least service to all areas with a specified density of housing. More than half of the states have since removed local authority to negotiate such provisions but they bear some responsibility for the far-reaching cable networks.

● Big Cable and Telecom Focus on Urban Markets
The big cable and telecom companies fight over urban customers, not rural customers. About 98 percent of the urban population (254 million people) have access to broadband. About 5 million urban residents, however, remain without broadband access. In rural areas, only 69 percent of the population (43.6 million people) have broadband access, leaving 19.3 million rural residents without high-speed Internet access.