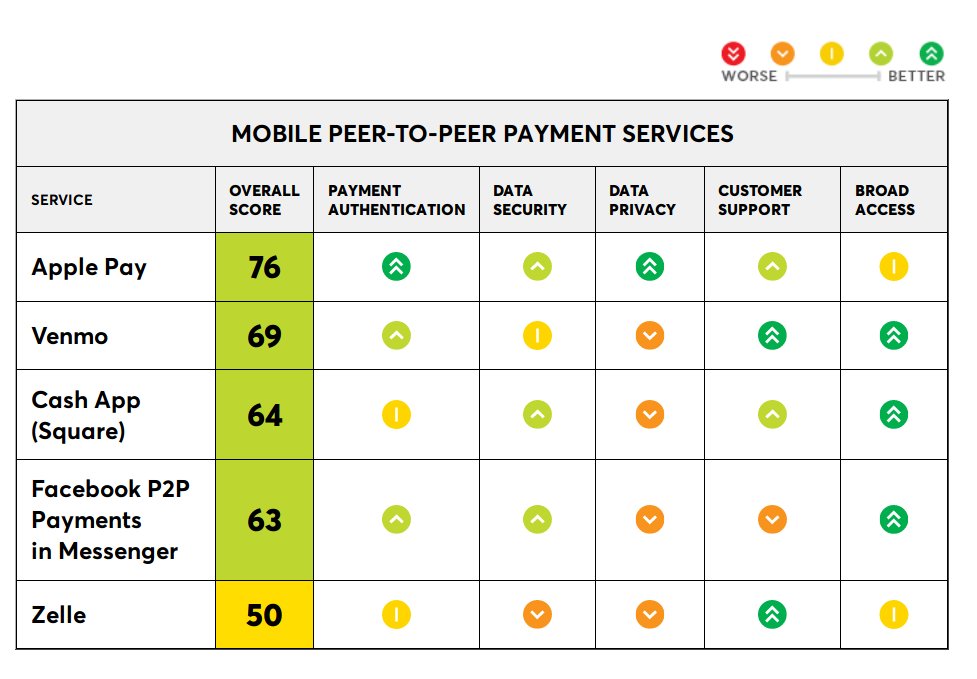 Consumer Reports is arguably America's most trusted source of product reviews -- published by Consumers Union, a venerable nonprofit with a deserved reputation for scrupulous care and neutrality -- and for years it has been wrestling with how to address privacy and cybersecurity in modern products (disclosure: I have advised them some on this).

In 2016, the magazine published a blockbuster security analysis of a horribly leaky pregnancy-tracking app; they hired a director of tech policy later that year; then they published a dire warning about crypto backdoors within a year; and were early doomsayers about SIM Swap scamming.

Now they've gone all in: according to Geoffrey MacDougall, Consumer Reports' head of partnership and strategy, they've broken new ground by explicitly factoring privacy and security into a product category roundup, which led them to give top marks to Apple Pay as the top-rated P2P payment service.

To judge data privacy and security, Consumer Reports convened a group of national privacy and security experts to help develop a set of criteria we’re calling The Digital Standard. We plan to use the standard in future ratings of internet-connected products. Our partners include Cyber Independent Testing Lab, which is a nonprofit software security testing organization; Disconnect, which makes privacy-enhancing software for consumers; and Ranking Digital Rights, which is a nonprofit that evaluates company privacy policies and their terms of service.

Apple Pay was the only service that got top marks from CR for data privacy, because its policies state that it limits the information it collects and shares on users and their transactions. It doesn’t store credit card or debit card numbers, and it states in the terms and conditions that it doesn’t sell users’ personal information to third parties, CR found.