Canadian soldiers have been given their marijuana marching orders 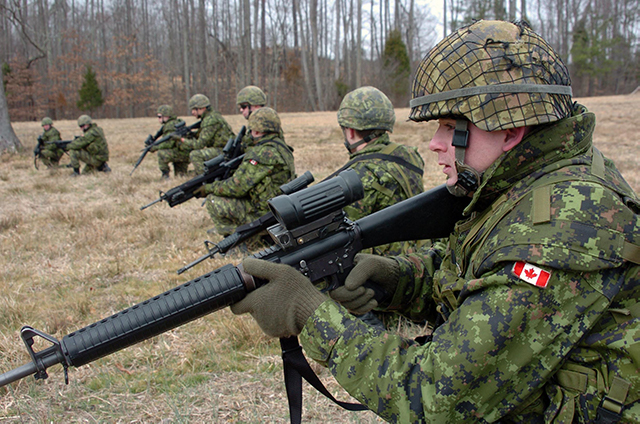 With Canada's legalization of cannabis consumption quickly creeping up on the calendar, the nation's Armed Forces decided that it might be high time to figure out where and when those with access to small arms, artillery and combat aircraft should be allowed to take a toke.

Soldiers will be banned from smoking or otherwise consuming the drug up to eight hours before reporting for duty.

The ban on usage will kick in 28 days before any deployment for personnel serving on submarines, planes or helicopters, or for those piloting drones, conducting high-altitude parachute drops or engaging in air traffic control.

"Traces of cannabis may remain in the human body for up to 28 days or more following consumption," the defense ministry said in a statement detailing the restrictions.

Any personnel due to handle weapons or explosives, participating in emergency services or driving military vehicles will be prohibited from consumption up to 24 hours before duty.

Oh, and if you're a civilian contractor or government employee working on behalf of the Canadian Armed Forces? All of these rules are for you, too.

While the CBC keeps the explanation of what military personnel can and can't do with marijuana simple, the Canadian Forces have taken a lot of time and effort to spell out, in great detail, what's ok for their employees and leadership to do with dope. This webpage explains the Canadian military's policy on cannabis, including the rules on use, how often drug tests can be administered, what'll happen to Canadian Forces personnel if they're caught breaking the rules, and where and when individuals can be treated for addiction.

In the wake of the Somalia Affair, where it is believed that alcohol use may have been a factor in the torture and death of a civilian teenager at the hands of Canadian Forces personnel, Canada has taken a strict line on the use of booze and other drugs in the field. As such, it's not surprising to find such an extensive amount of consideration has been given to the use of cannabis. Working in the military, even when you're not on deployment, is dangerous stuff. As much of a downer as it might be to some people, these rules are likely going to save lives.