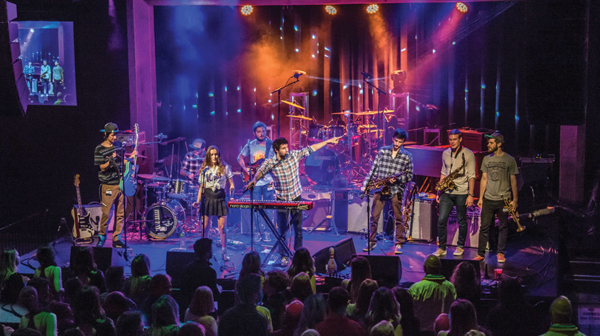 You've got to check out the band Lawrence and their new album, "Living Room"

Lawrence was a revelation when I discovered the band two years ago. My musical sensibility's been stuck on funk and soul since the ‘70s and Lawrence takes that sound and reinvents it. It's absolutely infectious.

Plus, I’m a dad whose kids are just a bit younger than the band members. So, halfway through that set when one lead singer pointed to other and said, “My name’s Gracie, and this is my brother Clyde, and we’re Lawrence,” my heart melted. Gracie was 19 at the time.

After the show, my buddy and I bought their CD ("Breakfast"), got their social media information, and for the past two years, we’ve missed barely any of the NYC-based band's many local shows. Every friend I’ve introduced them to has become instantly hooked, and our group has grown to about ten rotating members.

The band’s fans are an enthusiastic and growing mass of twenty-somethings, so our #DadsForLawrence contingent mostly hangs out in the back of each show. A young guy at the show a couple of weeks ago, puzzled by our presence, asked me, “So, are you guys… relatives of the band?”

Lawrence and is led by the lead singer-songwriter combo Clyde and Gracie Lawrence, and the band is mostly friends Clyde gathered while studying music in college. Lawrence’s music is just incredibly fun, with that retro soul vibe, but infused with a modern pop sound.

"Do You Wanna Do Nothing With Me?"

Did I mention they're prodigies? Clyde wrote this beautiful song when he was in high school (it’s on Clyde’s EP, "Homesick," from 2013).

It may be oversimplifying it, but it seems to me that it’s Clyde who brings the retro feel, and Gracie is the one who contributes the more modern pop sensibility. That’s probably because of the difference in their voices. Gracie has a voice made for current pop, capable of vocal pyrotechnics that can drive a crowd into a frenzy. I’ve seen it happen dozens of times. Clyde has a slightly raspy, almost impossibly charismatic ‘70s soul/classic rock voice.

Melding their voices and songwriting sensibilities may seem impossible, but it works like magic, probably because as siblings they’ve been playing music together their whole lives.

It’s a testament to their synergy that some of my favorite moments in their songs are when one takes a small part in the other’s lead-vocals song. Check out the energy when Gracie takes a part in "Superficial."

And I always find it touching when Clyde comes in to sing the bridge (is that the right term?) on "Misty Morning."

I've had a blast being a Lawrence-head (?) the last couple of years. Look, if your favorite band is U2, you might see them from the top row of an arena when they're in town once every five years or so. But if you’re lucky enough that your favorite band is an up-and-comer like Lawrence, based in your own city, you might find yourself coming home from a $20 show in the same subway car as the lead singer and sax player, offering to help them carry equipment and asking about lyrics.

I have spoken to them a few times, especially Clyde, and they are absolutely unaffected and genuine. They just seem excited about the music they’re making with their buddies and the effect it’s having. They fill venues with adoring fans, but will invite their little brother on stage or give a shout out to their grandparents.

It’s also been fun watching their popularity gain momentum at an alarming rate. When I started going to their shows, they played small rooms or opened for other bands. But as the months went by, their headlining shows got bigger and bigger, and the crowds more and more enthusiastic and knowledgeable. They quickly sold out the huge Brooklyn Steel for their show in May, easily their biggest NYC headlining venue to date, and they instantly sold out for last week's three NYC shows.

Those three shows introduced their new album, "Living Room," which only continues their amazing run of writing and creating fantastic music, and their climb up the popular music ladder. Lawrence announced that “Living Room” went to #3 on the iTunes R&B and Soul Chart.

I'm obsessed with “More,” an absolutely rousing song that sounds like the modern R&B-Gospel music I’ve been listening to (my two recent musical discoveries meet!). And “The Heartburn Song” evokes one of my all-time favorites, and not coincidentally theirs, Stevie Wonder. I love the song and the video for “Probably Up”...

... and also “Make a Move,” the video for which the Clyde and Gracie directed themselves. A friend accurately noted that the video is made by Gracie’s acting ability (Oh, yeah, she’s also an actress).

In one of those shows last week, the album had been out for only a few hours, and the video for “Make a Move” only a couple of days. Yet when they started the song, the crowd instantly sang along with Gracie. I saw her whisper to Clyde, “This is crazy.”

They are touring North America and Europe in support of “Living Room” right now, and I can’t recommend going to see them enough, if you can still get tickets. The energy of their shows is amazing. I’ve focused on Clyde and Gracie, but the rest of band is so great: both in musicianship and in creating a fun, party atmosphere.

Here is information on the tour, and here are links where you their albums "Breakfast" and "Living Room" can be purchased.

One more! Lawrence's cover of Christina Aguilera’s “Come On Over.” Members of #DadsForLawrence are probably their only fans who heard their version first.

I’m excited to be back on my old home turf next week, with two speaking events in Kansas City, Missouri, and Lawrence, Kansas. Both events are centered on Before the Lights Go Out, my book about electricity, infrastructure, and the future of energy. Thursday, August 30, 7:00 pm — The Raven bookstore in Lawrence I’ll […]