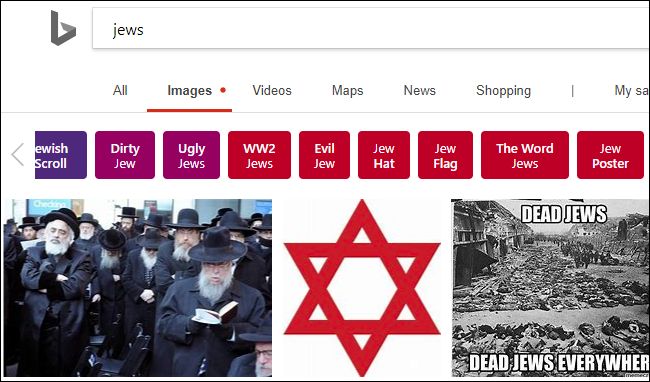 Someone checked in on Bing search and the results aren't pretty. At some point it became a sewer of racism, antisemitism, pedophilia and conspiracy theories—and that's just the recommendations.

In his investigation, Mr Hoffman looked up racially-themed terms and found that the majority of suggestions for further searches that accompanied results pointed people to racist sites or images.

Racist memes and images were also returned for many of the words he tried.

"We all know this garbage exists on the web, but Bing shouldn't be leading people to it with their search suggestions," wrote Mr Hoffman.

It is believed that the suggestions for further searches connected to these terms have emerged from a combination of user activity and concerted action by far-right groups to skew responses.

Everyone's mad at Microsoft for not giving a shit (and it has promised to start giving a shit), but it is instructive to see such a huge-scale mirror image of what the algorithms think we want to see--and what we are are searching for.

Last October, I published a list of cities that appeared to have contracted with Predpol, a "predictive policing" company, based on research provided to me by an anonymous source who used clever methods to uncover the customer list.

Rod McCullom at Undark has a terrific overview of the perpetual “virtual lineup,” where half of all American adults “are enrolled in unregulated facial recognition networks used by state and local law enforcement agencies.”

The US imprisons more people than any other country in history, both as a total number and as a proportion of its population; a White House data-mining effort proposes to set free prisoners who are “low risk,” which is something we can all get behind.