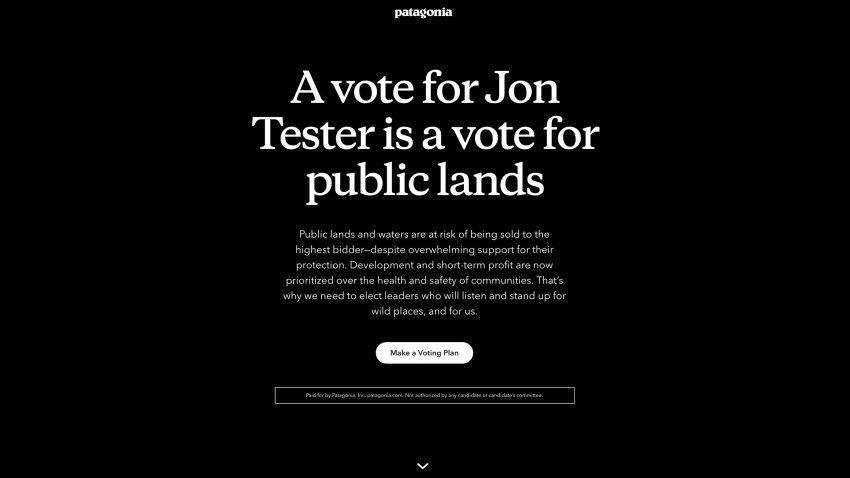 Patagonia founder Yvon Chouinard has called on the outdoor industry to join him in backing politicians who believe in preserving public lands; his company has now backed Montana Democratic Senate incumbent Jon Tester (facing a Trumpian challenge from Republican Matt Rosendale, who espouses the cultlike belief that the Constitution bans the federal government from owning land, a belief that was spread by Cliven Bundy and a group of racist Mormon extremists) and Nevada Democratic Congressional incumbent Jacky Rosen with a 97 percent approval rating from the League of Conservation Voters.

Patagonia CEO Rose Marcario says the outdoor industry should lead a political movement as well-organized and effective as the NRA, but aimed at protecting public lands. Both conservative and liberal voters disapprove of Trump's record on public lands, making it a rare bipartisan issue.

With the momentum of the past two years, this almost seems an inevitable step for Patagonia. The company’s current CEO, Rose Marcario, has said she’d like to see the outdoor industry become a political force like the NRA. “We cannot give up an inch of protected land on our watch,” Marcario told Streep. “Not an inch.” That campaign kicked off most publicly when Patagonia forced a decision on the governor of Utah: either come out against President Trump’s plan to shrink Bears Ears National Monument, or Patagonia, REI, and the North Face would use their clout to move the Outdoor Retailer show and the $45 million it bestowed on the state’s economy each year.

Now the show’s home is Denver. And after Trump signed an executive order that cleaved Bears Ears by 1.35 million acres, Patagonia sued. Its homepage, in black and white, read bluntly, “The President Stole Your Land.” That led the House Natural Resources Committee, chaired by Utah Representative Rob Bishop, who harped loudest for the resize, to tweet a mockingly similar image that read, also in black and white, “Patagonia Is Lying to You.” Chouinard and Marcario had their confrontation, weenies be damned.