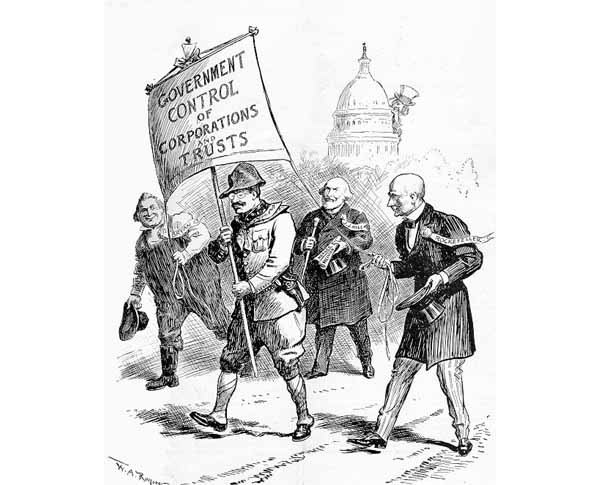 Tim Wu (previously) is a legal scholar best known for coining the term "Net Neutrality" -- his next book, The Curse of Bigness: Antitrust in the New Gilded Age (previously) challenges the accepted wisdom about today's digital monopolists, which is that they grew so big because of some underlying truth about online business ("first-mover advantage," "network effects," "globalism," etc). Instead, Wu argues that the reason we got digital monopolies is that we stopped enforcing anti-monopoly rules against digital companies (and then against all kinds of companies).

In a new excerpt from "The Curse of Bigness" published today on Wired, Wu fleshes out this argument in more depth, with a fast-moving history of how regulators were lulled into a belief in the especially competitive markets in technology because of the quick rise and fall of companies like AOL, leading to a hands-off approach to regulating the tech markets that allowed for the rise and rise of companies like Google and Facebook.

I'm looking forward to reading the rest of the book -- it's obvious that while these special theories of tech's intrinsic competitiveness were key to lulling regulators to sleep during the 2000s and 2010s, the theories also dovetailed with a modern economic orthodoxy from the University of Chicago that held that unless companies were raising prices, there was no reason to limit their actions.

Unfortunately, antitrust law failed to notice that the 1990s were over. Instead, for a decade and counting, it gave the major tech players a pass—even when confronting fairly obvious dangers and anticompetitive mergers. That is best exemplified by the Facebook story. Launched in 2004, Facebook quickly dispatched its rival, MySpace, which had been a rare Los Angeles tech-success story but had become a mess of intrusive advertising, fake users, and trolls. In just a few years, Facebook achieved an early dominance over general-purpose social networking.

But by the 2010s, Facebook faced one of its most serious challengers, a startup named Instagram. Instagram combined a camera app with a social network on which it was easy and fast to share photos on mobile. It was popular with younger people, and it was not long before some of its advantages over Facebook were noticed. As business writer Nicholas Carlson said at the time, Instagram “allows people to do what they like to do on Facebook easier and faster.”

Having already gained 30 million users in just 18 months of existence, Instagram was poised to become a leading challenger to Facebook based on its strength on mobile platforms, where Facebook was weak. By the doctrine of internet time, Facebook, then eight years old, was supposed to be heading into retirement.