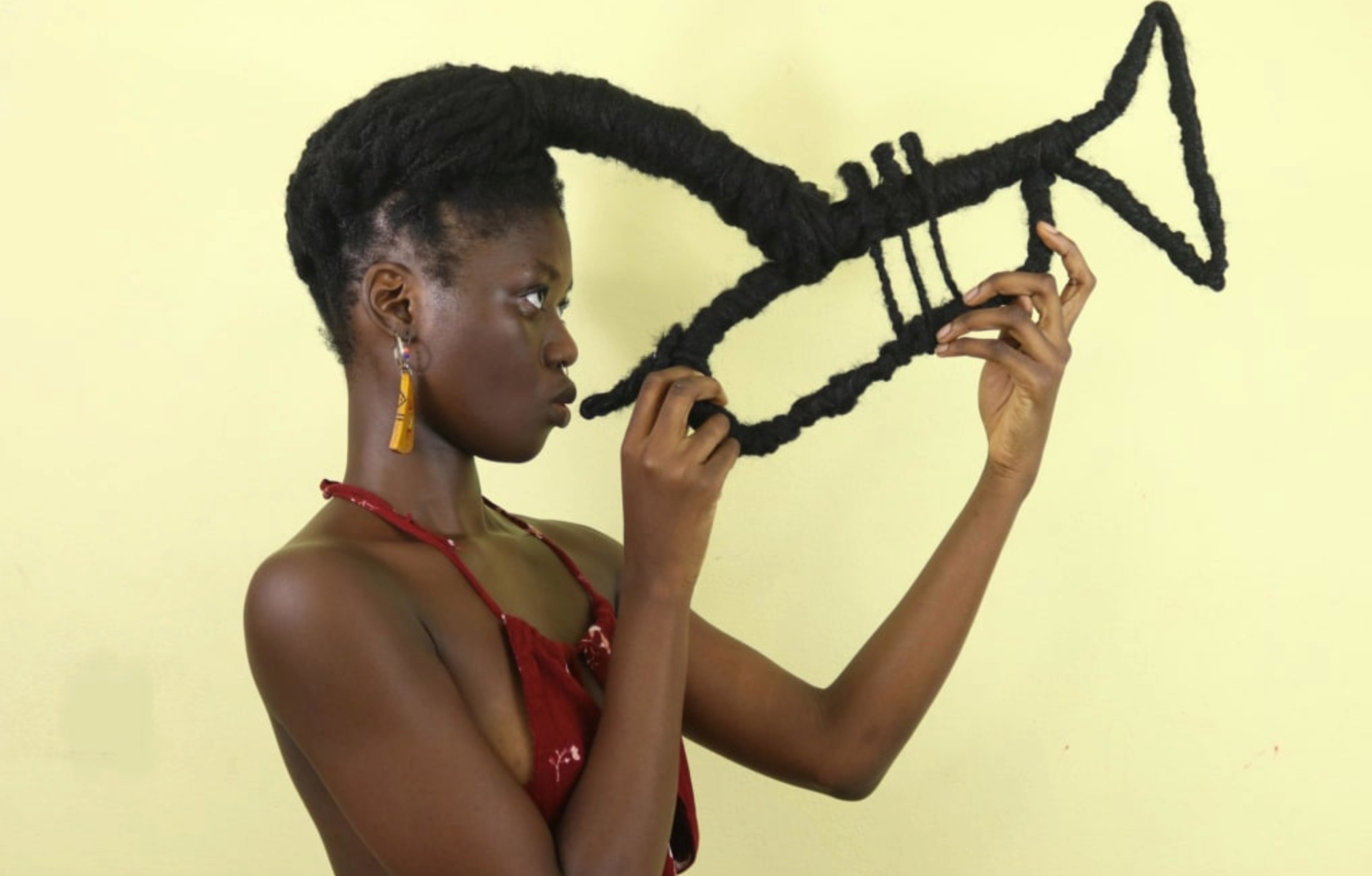 African artist Laetitia Ky, 22, transforms her hair into fantastic sculptures as a hirsute form of socially-conscious art and, sometimes, just for fun.

In the Ivory Coast of her childhood, "the norm was to straighten your hair. So when I found the natural movement, I was fascinated. That's when my hair became important for me," she said.

Today Ky wears long extensions, adjusting their length depending on the design she wants to create. She sculpts by herself, using little more than wire, wool, a needle and thread. Ky never knows how much time she'll need to complete a project: so far, she said, a single piece has taken anywhere from 20 minutes to up to three hours...

Underlying it all, though, is a desire to promote a vision of African beauty grounded in pre-colonial aesthetic traditions; a commitment to body-positivity; and a well-defined feminist politics.

"Sexism exists everywhere, but in Ivory Coast there's still an attitude that women aren't supposed to be ambitious. My parents divorced when I was young, and my mom did everything on her own. So, it was hard for me to accept, later on, when I started hearing that women belong in the kitchen. I think it's really important to spread a message of equality," Ky said.

Against gun and violence use love and art ! 💖💖💖 cause art denounces, educates, and can make people smile, I am convinced that artists can change the world ! Hummm but im a cute james bond girl huh 🤣🤣🤣🤣 #melanin #blackart #love #artisticgun #gun

I am addicted to art and you? Tell a positive or funny element you are addicted to !!! More seriously if you are reading me and you have an addiction that affects you negatively that you want to erase, (alcohol, drugs, medicine, person, object), know that I am with you and I believe in you. I hope the universe will give you the strength to do that. I know its not easy but You are stronger and braver than you imagine. I wish you to attach only to things that will improve your life and make you happy. If you have one of your loved ones in this situation, I wish him the same and to you to have the strength and patience to help him. Everything will be alright. #braids #braidart #cigarette #addiction

When your fav song comeee, everything around you become a microphone !!!! #bbhmm by the one and only ! QUEEN @badgalriri Tag her please 😍😍 #rihanna #badgalriri #microphone #braids #art

#bodypositivity #bodypositive #selflove #selfcare #loveyourself Story by @maja_diana I have a story for body positivity too. The thing is, I never struggled with my body, I always liked it. What I never liked were the comments. In relation to my body I have big boobs, wich is not the problem even if I'm not always happy with them. People might think, I should be and even if I am very Ok. with that the most time, it's not always funny. When i was younger (about 14), many people, especially women called me a whore, for just having them. I often got told that I am too slutty and my shirts are too sexy. The thing is, i never wore anything the others don't, just normal shirts, it just looked diffrent on me. People won't belive how many adult (in my case women) assault young teenager girls. When you are 14 and haven't even thought about sex, being a "whore" really confuses. In the other case for the men you're also just boobs, nothing else. It's the only thing they can see. I don't dress nondescript, I don't want to. I can't see why I should dress very careful just because an anybody feels attacked by my body. I wear what I like, and I do what I like, not to impress any men, not to be "sexy" for society. I do it just for me because I want to.