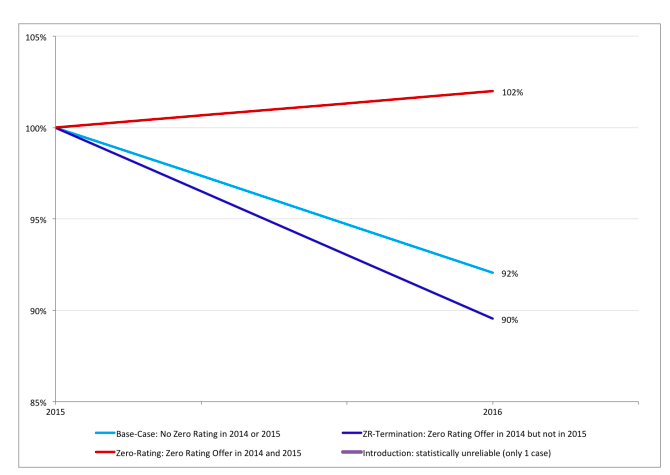 Facebook loves "zero rating," when an internet provider takes bribes from online services to exempt them from data charges on their networks: Facebook says that having a roster of (Facebook-approved) services that are free-to-use benefits the poorest people in a country (and the fact that this also makes "Facebook" synonymous with "internet" for whole nations is merely incidental).

But reality has a well-known anti-Facebook bias, which is why all the studies done on the supposed benefits of zero-rating have shown that the practice is harmful in every way: primarily benefiting the rich, not the poor, for example.

Now, a careful, comprehensive study of 30 European countries by Epicenter.works finds that zero-rating encourages carriers to collude with Facebook to raise prices on non-zero-rated services, making it much harder to escape Facebook's orbit (and other big incumbents).

Many countries and territories are debating zero rating today, from California to the FCC, and the same old arguments about access for poor people and bridging the digital divide keep getting trotted out to support what is ultimately an anti-competitive tie-up between the biggest telcos and the biggest online services to freeze out smaller competitors.

This study is an important addition to the scholarship rebutting this nonsense, and as Net Neutrality moves back into US Congress, it's a handy document to keep around for your racist Facebook uncle and other low-information types who are being astroturfed into thinking that Net Neutrality is "government control of the internet."

Based on the evidence, zero rating not only serves as a means to enhance ISPs’ power over the Internet, but it’s also how they charge consumers more money for wireless service. Zero rating was originally going to be banned by the FCC under the General Conduct Rule, but when the FCC changed leadership the agency promptly green lighted and encouraged the industry to engage in zero rating practices before it began its repeal of net neutrality.

EU countries that do not have zero rating practices enjoyed a double digit drop in the price of wireless data after a year. In comparison, the countries with prevalent zero rating practices from their wireless carriers consistently saw data prices increase. This makes sense; carriers have an incentive to raise the costs of exploring alternatives in order to make their preferred, zero-rated choice of content more attractive. However, once that incentive is removed, the wireless carrier no longer has a reason to raise the cost of alternatives because nothing is given special treatment. In short, zero rating practices cost you more money.