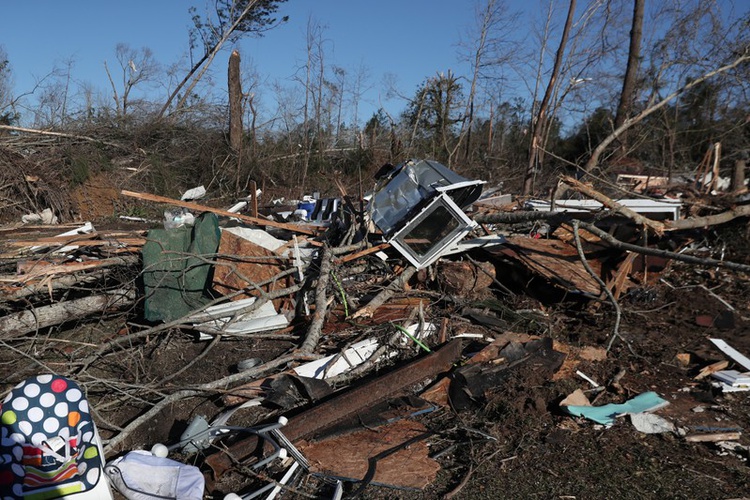 In Alabama, authorities confirm that The Poarch Band of Creek Indians donated $180,000 to cover all costs for funeral services and interment for the 23 people killed in Sunday’s tornado in Lee County.

The county coroner announced this news on Thursday.

“The coroner’s office received word that they wanted to help and reached out to them and they agreed. Their first commitment was for $50,000. Later they called back and ask me what it would take to cover the costs and I gave them a figure and they graciously made it happen,” said Lee County Coroner Bill Harris. “The monies will be deposited with the East Alabama Medical Center Foundation to be dispersed to the funeral homes to cover the cost of the funerals. I am so thankful for them to step up in this manner and help the families of this tragedy.”

In Alabama, search and rescue teams were still combing through the wreckage of houses flatted by weekend tornadoes this week. On Tuesday, they were looking for seven or eight people still unaccounted for in the wake of the deadliest U.S. tornado outbreak since 2013.

The tiny community of Beauregard, near the Alabama-Georgia border, was beginning to mourn the 23 people confirmed killed by the storms, which included four children and seven people from one family, officials said on Tuesday.

Most of the people who died were found near their homes. The four children were age 6, 8, 9 and 10, said officials.

It looks like that's the community being addressed by today's announcement. Such terrible loss.

About the economic power of the Poarch Band of Creek Indians, from the tribal website:

They step up regularly. Here's a previous example of the tribe donating 100,000 for disaster relief, just one month before in the area [PDF Link].

If you or someone you know was affected by the deadly March 3 tornadoes in Lee County, be aware that you are eligible to apply for both Individual and Public disaster assistance funds from the Federal Emergency Management Agency.

These disaster assistance funds are available for homeowners, renters, and business owners in Lee County affected by the recent 2019 storms.

Individuals and business owners can register for assistance online at DisasterAssistance.gov or by calling 800-621-3362.