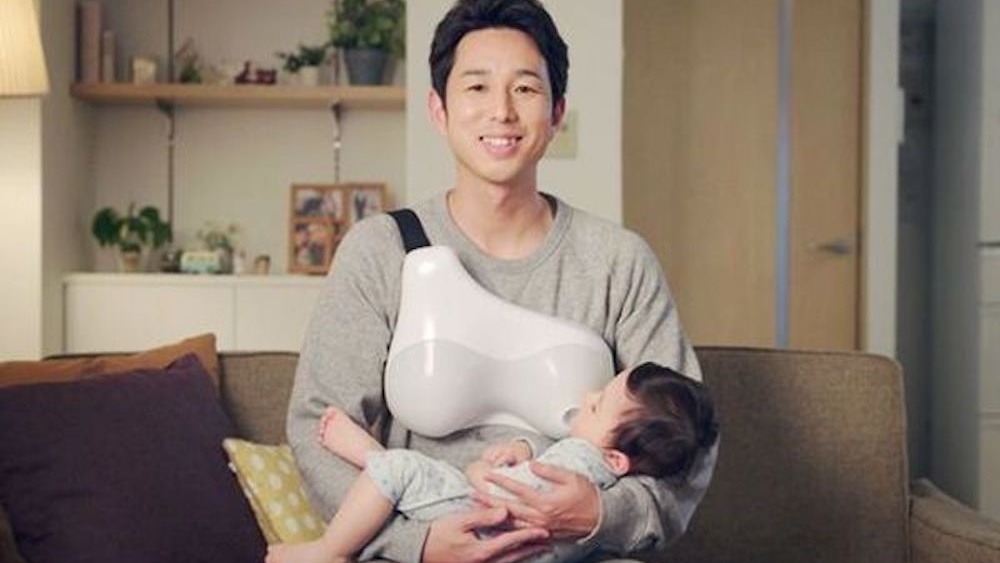 The Father's Nursing Assistant is made by Dentsu, a Japanese company. It's basically a canteen in the shape of woman's breasts. Of course, it's also wireless with some kind of app to let you know what happened.

The amount of time infants in Japan spend sleeping is shorter compared to the rest of the world. Much of the parental stress and difficulties surrounding childrearing are related to feeding and sleeping, and generally the rate of participation by fathers tends to be low. Breastfeeding is also effective at helping the parent sleep--a benefit that is currently skewed toward women. Focusing on breastfeeding, we aim to decrease the amount of burden on mothers and increase the amount of time infants sleep by enabling fathers to breastfeed. This is realized with the FATHER'S NURSING ASSISTANT wearable device. Based on advice from pediatricians and babysitters, who say that babies tend to touch the breast with their hands when feeding and that the softness seems to sooth them, the product has been shaped to resemble a woman's breasts. As a result, a father can hold his baby in both of his arms, creating a deeper skin ship between them and enabling the baby to sleep peacefully in his father's arms. Father's Nursing Assistant has a tank for milk on one side and the breastfeeding system on the other. The device also senses the infant's breastfeeding and sleep timing and is linked to an app that facilitates a better, visual understanding of the infant's condition.