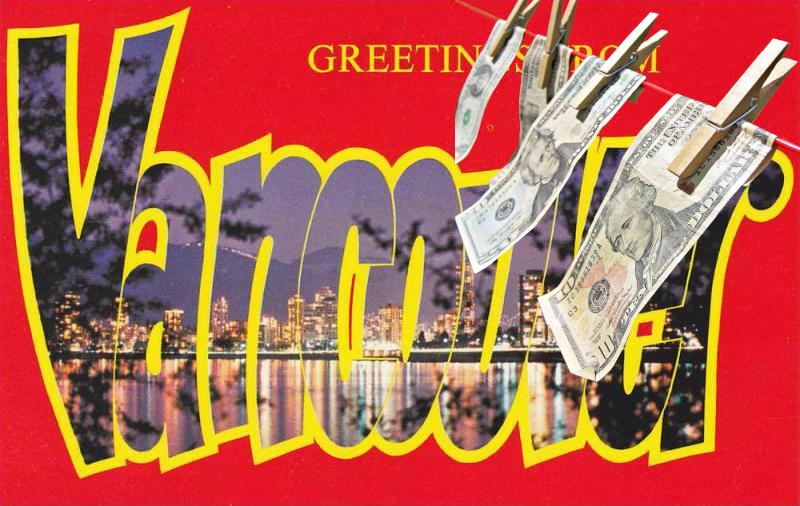 The British Columbia government commissioned independent investigator Peter German to produce a report on the role of laundered criminal money in the province's white-hot real-estate bubble, centred on the city of Vancouver; German's report found that last year alone, CAD7b was laundered through BC, with much of that money going into property (as well as luxury cars and casino gambling).

The report found that $5b of that money went into real-estate transactions, accounting for 4.6% of the value of all real-estate sales in the Province last year, driving prices up by 3.5%-4.7% (and this increase will have drawn more speculators into the market, further driving up prices).

From casinos who accepted hockey bags full of cash (most Canadian shady deal ever) to one in five BC properties being bought for cash, often through legal entities designed to shield their beneficial owners' identities, BC has become a global hub for criminal money laundering, with real-estate serving as the "oil" of the BC economy.

German pointed out that he was able to get these figures with a small team of ten researchers in less than a year from public sources alone, suggesting that if the Province hadn't been aware that this was going on, it was because they chose not to be.

* One out of five B.C. properties are bought in cash; over the past two decades, C$212 billion in property has been bought in cash.

* The true owners can’t be identified for the vast majority of C$28 billion in B.C. residential property held by legal entities.

* More than 25 properties worth C$34 million have owners listing addresses in countries subject to trade sanctions.

The anecdotal examples are just as staggering: