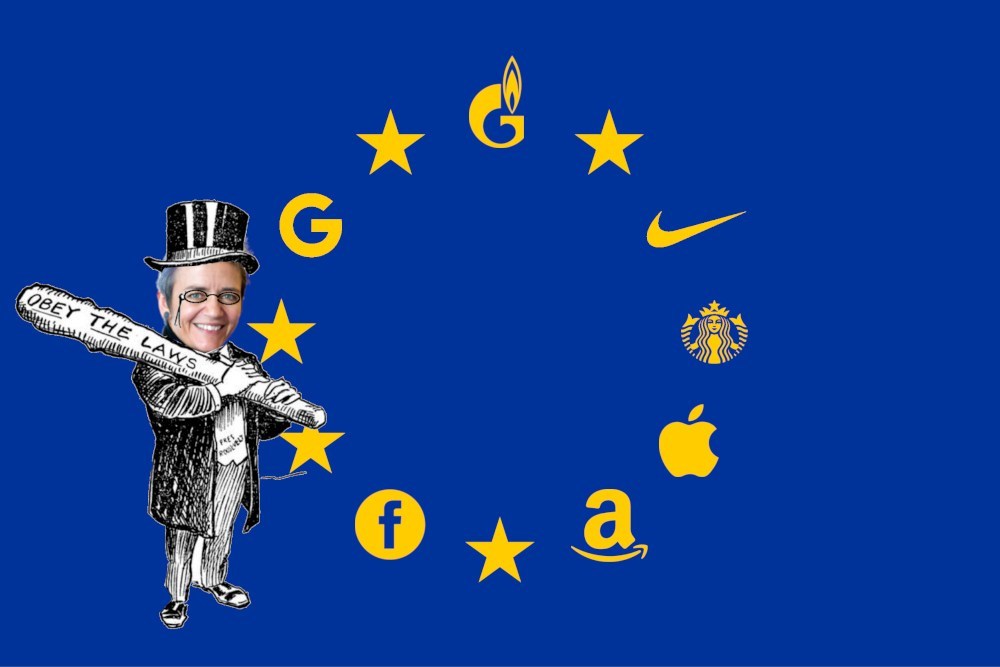 Margrethe Vestager (previously) is the EU Commissioner responsible for handing out billions in fines to Big Tech to punish them for monopolistic practices.

Vestager and I both appeared on the bill at Republica in Berlin this month, and at the time, I pressed her from the audience on whether she thought that the ultimate answer to monopolistic abuses was to break up monopolies. She was incredibly skeptical that such a thing was desirable (describing state intervention in the deployment of "private property" as an extreme measure) or even possible (because the Big Tech firms would tie up any divestment orders in the courts for years).

Vestager just repeated these sentiments at the Vivatech conference in Paris today, saying "For us it would be a remedy of the very last resort. It would keep us busy in court for even a decade."

Vestager's remarks are out of step with a growing chorus of calls from all sides to break up the company, and while it's obvious that she's better qualified than almost anyone to assess the realistic chances of a breakup order, the actual breakup isn't the only useful outcome of such a proceeding. As Tim Wu has explained, the mere spectre of a breakup exerts a powerful discipline on firms, who curb their worst impulses in order to avoid attracting their own trustbusting torment.

Worryingly, Vestager calls for Facebook to grant access to its data -- a potential privacy apocalypse -- rather than encouraging adversarial interoperability by giving new entrants the right to make products that plug into incumbents' services to help users liberate their data and stay in touch with their friends on the old service -- a practice that was once universal but has now all but disappeared thanks to a constellation of laws that prohibit it (Computer Fraud and Abuse Act, Section 1201 of the DMCA, federal trade secrets, etc).

"For a giant it's not necessarily a good thing that innovation happens -- they're big, they're comfortable," she said. "This is why we see that even illegal behavior happens to stifle innovation." As an example she pointed to the fine handed down to Google last year -- the largest the EU has ever issued -- for abusing its Android dominance.

The EU's competition commission issued Facebook a $122 million fine in 2017 for providing it with misleading information in the wake of the social network's 2014 acquisition of WhatsApp. But the acquisition itself didn't fall foul of EU competition rules. Vestager doesn't seem to see Facebook's monopoly as a roadblock to innovation, but the company's stranglehold over data is a separate matter.

Rather than attempting to break up the company, she said, it would "be much more direct and powerful to say we need access to data." Having access to data is the difference for smaller and younger tech companies in being able to make a success of themselves in the market, she added. "What we would be looking for is ways to help innovation happen."