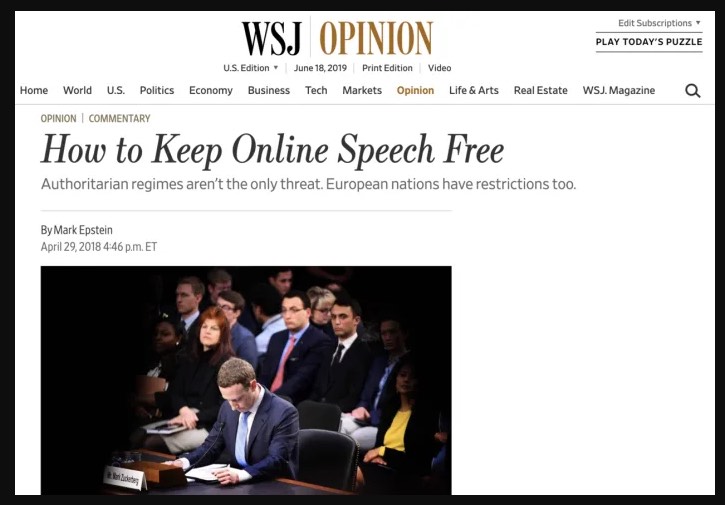 Marcus Epstein is a former GOP operative, a former Richard Spencer associate, and once wrote for white nationalist site VDare. He also pled guilty to assaulting a Black woman and calling her the n-word. But as white nationalism goes mainstream, so has Epstein. Lately, he's been rehabbed as an opinion contributor to mainstream publications including Wall Street Journal, the Hill, and Forbes, under the pseudonym “Mark Epstein.”

As Ryan Mac and Joseph Bernstein at BuzzFeed News write, this is only the latest example of the Trump-aligned racists “becoming part of the mainstream conservative movement over the last decade.”

The Wall Street Journal just ran an Epstein piece titled “Antitrust, Free Speech and Google” earlier in June, but wouldn't tell Buzzfeed if Epstein's history was examined before the piece was published.

Marcus Epstein, who worked for former Colorado congressman Tom Tancredo and founded a nativist political club with white nationalist Richard Spencer, has written more than a dozen opinion pieces for the Journal, the Hill, Forbes, US News and World Report, and the National Review over the past two years. His pieces, which mainly focus on the regulation of the technology industry, were published under the byline “Mark Epstein.”

In six different pieces for the Journal, Epstein is identified as an “antitrust attorney and freelance writer” and addresses topics including the supposed threat to conservative speech posed by Google and Facebook, and the ways regulation and antitrust might be used to ensure “viewpoint neutrality” and consumer protection, respectively. They make no mention of his past, which includes contributions to the white nationalist site VDare and charges that he assaulted a black woman, after racially abusing her, in 2007. (In 2008 in District of Columbia Superior Court, Epstein entered an Alford plea — a plea in which the defendant accepts the consequences of a guilty verdict without admitting guilt — after which the charges were dropped.)

Got that? Verbally abusing a Black woman, and assaulting her. Epstein says he had an alcohol problem, and has since graduated from University of Penn Law School, and become very interested in the power wielded by big tech.

But Epstein, who worked for the conservative commentator Pat Buchanan, was a key figure in nativist and white nationalist political circles from the mid-2000s to the early 2010s. In 2006, he founded the now-defunct Robert A. Taft Club alongside Spencer and Kevin DeAnna, another leading white nationalist. Invited speakers to that club included influential white supremacist Jared Taylor and the journalist John Derbyshire, who would eventually be fired from the National Review in 2012 for a racist column.

Epstein also helped run Youth for Western Civilization, a far-right student group, founded by DeAnna and Taylor, whose members included white separatist and neo-Nazi Matthew Heimbach. From 2004 to 2009, Epstein, under his full name, wrote for VDare, where his posts came with provocative headlines like “[Howard] Dean Is Right - GOP Is "The White Party." So?”; “It Depends On What Your Definition Of "Jim Crow" Is”; and “White Refugees And Culture.”

Read more:
A Former Republican Operative With Ties To White Nationalists Has Been Publishing Opinion Pieces In The Wall Street Journal