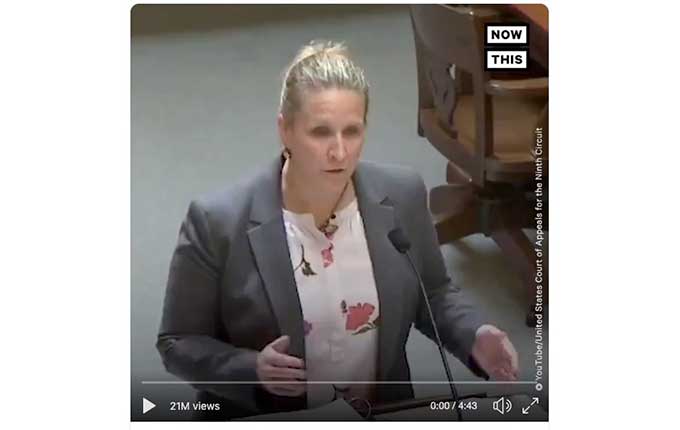 [UPDATE 6/26/19 1:58pm PT. According to an Atlantic article by Ken White, a former federal prosecutor, the woman in the video is Sarah Fabian, the senior attorney in the Department of Justice’s Office of Immigration Litigation. "Before Sarah Fabian defended concrete floors and bright lights for President Donald Trump," writes White, "she defended putting kids in solitary confinement for President Barack Obama." White also writes, "And even though the litigation began under the Obama administration, it was the Trump administration that elected to bring this appeal and ask the court to bless these inhumane conditions as 'safe and sanitary.' That’s an extremely aggressive legal argument, and one that suggests that the disturbing conditions being reported at confinement centers are intentional, not a sign of mere neglect." Thanks for the tip, TheChaz!]

The US government is forcing children to sleep in chain-link cages on concrete floors with aluminum foil blankets and depriving them of basic necessities like soap and toothbrushes.

“The Taliban gave me toothpaste & soap,” tweeted David Rohde, a New Yorker editor who was held hostage by the Taliban for seven months.

The Taliban gave me toothpaste & soap.

And Jason Rezaian, an opinion writer for Washinton Post Global, who was held in custody for a year-and-a-half in Iran, tweeted, "I had a toothbrush and toothpaste — not exactly Aquafresh or Tom’s — from the first night. Actually, I had almost nothing else in my cell while I was in solitary confinement. I was allowed to shower every couple of days."

I had a toothbrush and toothpaste — not exactly Aquafresh or Tom’s — from the first night. Actually, I had almost nothing else in my cell while I was in solitary confinement. I was allowed to shower every couple of days. https://t.co/3Jc4U5g9Uy

Now, look at this Justice Department lawyer twist her tongue into knots arguing that the children they've trapped in cages don't need the luxuries of soap and blankets that the Taliban and Somalian pirates lavish on their detainees:

A Trump official tried to argue that detained children don’t need soap, toothbrushes, or beds to be ‘safe and sanitary’ while in Border Patrol custody pic.twitter.com/sRFPZsDbwy

How can she live with herself?

In Saudi Arabia, women can only get a divorce after proving abuse in court, but men can simply file -- in secret -- for a divorce from their wives, and sometimes, they don't even tell their wives, continuing to live with them so they don't have to pay alimony, fraudulently using power of attorney to […]

The Management & Training Corporation operates two federal prisons and 20 more state/local prisons around America; previously, it has been censured by Arizona for its role in deadly prison riots; now, the ACLU and Southern Poverty Law Center are suing the state of Mississippi over the violence, neglect, and rampant human rights abuses at Management […]

A bill that demotes domestic violence to a civic offense has passed Russia’s lower parliamentary chamber, the Duma.