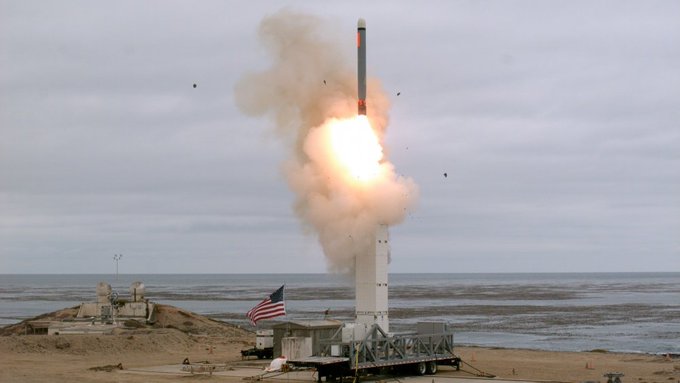 The Pentagon today announced it tested a conventional ground-based cruise missile that went more than 500 kilometers, which would have been banned under the now-defunct INF treaty.

Between this and the mysterious Russian missile that made the nuclear monitoring sites go dark last week? Yeah, INF is now toast, not just on paper. It's official.

The missile was fired off the coast of California on Sunday.

Data from the missile test will be used to refine weapons development, the Pentagon says.

JUST IN: Pentagon has announced that it has tested a ground based cruise missile that went over 500 KM - that is, a weapon that had been banned under the INF treaty. Data from test will be used to inform future weapon development. pic.twitter.com/18nIdSkJe5

WATCH: U.S. flight-tests ground launched Tomahawk variant off of California in a test that went "more than 500km", a first since the end of the INF treaty earlier this month. Notable that they chose the Tomahawk as the original ground-launched version of it was killed by INF pic.twitter.com/aIPKRFHdvC