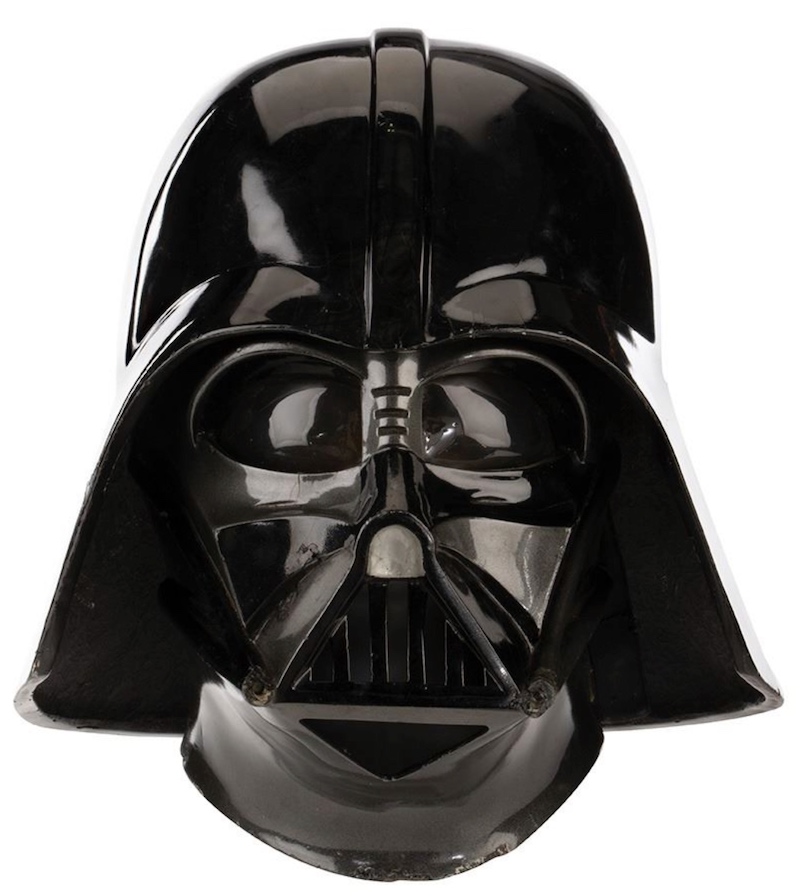 Up for auction is one of Darth Vader's helmets worn by actor Dave Prowse in Star Wars: Episode V – The Empire Strikes Back. It's estimated to sell for nearly half a million dollars. That's a lot of galactic credits. From iCollector:

David Prowse "Darth Vader" screen used signature mask and helmet from Star Wars: Episode V - The Empire Strikes Back. (TCF, 1980) Without question, Darth Vader is one of the greatest villains ever portrayed on film. His angular, skull-like mask and helmet has been lifted to iconic status and is universally recognized as a symbol of evil in pop culture. Both the mask and helmet are constructed of fiberglass. The Mask is painted in dark metallic gray with black accents; its interior is marked with a "1" in white paint with worn foam rubber padding and tinted plastic lenses. Two of the original three elastic straps are present to secure the mask to David Prowse's head. The top of the mask originally secured to the jet-black helmet with a circular PVC connection (now missing; the three screw holes used to attached the PVC fitting are present). For added security, the mask's forehead attached to the inner portion of the helmet with Velcro (still present on the helmet's interior, but only the adhesive remnants remain on the mask, and remain hidden behind the helmet). The helmet's interior is marked with a "3" in brown paint. Interior metal mesh behind the triangular respiratory vent and "chin grille" are missing, as are the turned aluminum "atmospheric sensors" at either side of the vent. Exhibiting some chipping on lower edges and right "cheek" from production use. Remnants of adhesive used to attach mask to the helmet are still present on the interior. Original Darth Vader helmet/masks are exceedingly rare and considered the "Holy Grail" of science fiction artifacts.