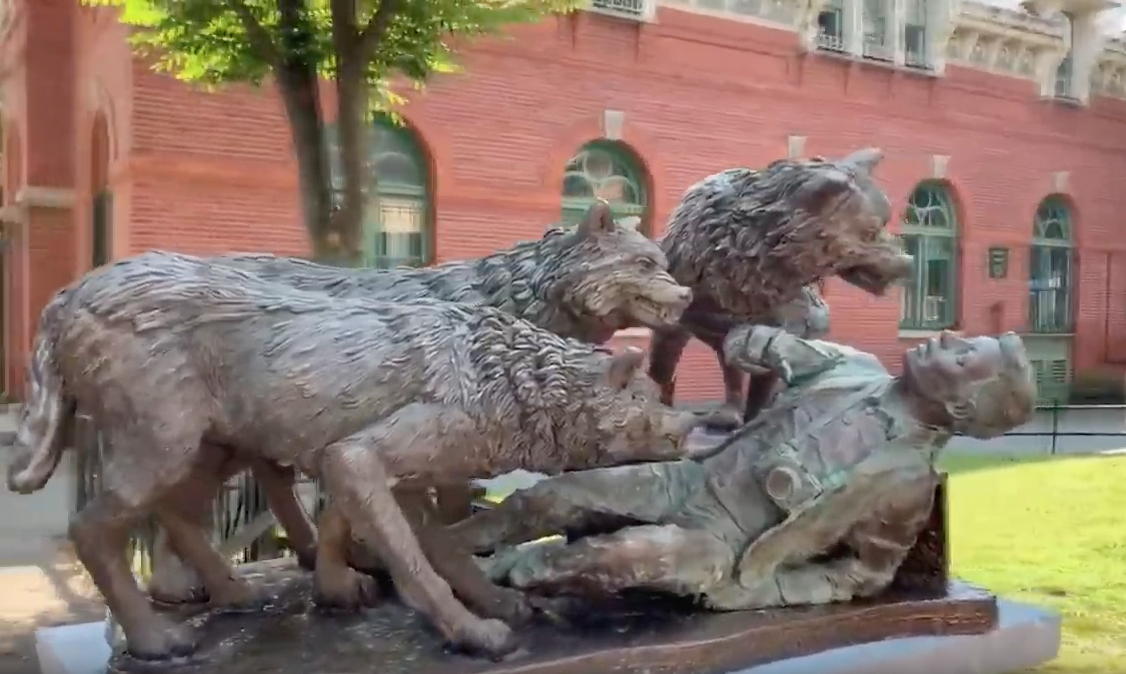 A series of identical monuments depicting a tourist being mauled by a pack of wolves have surreptitiously been installed in different New York City parks with plaques that read:

In the late 1970s, New York Mayor Edward I. Koch launched an unprecedented campaign against subway graffiti. The city employed new guardians to patrol its vast train yards—wolves. Captured from upstate New York and set loose in various borough depots, the wolves successfully kept taggers at bay until anti-graffiti technology eliminated the need for the animals. At that point, the wolves migrated underground. Since then, wolf packs have survived and even thrived in New York’s labyrinthine tunnels, emerging in local parks only on occasion to hunt in the moonlight for live prey. In fact, the NYPD chalks up the majority of missing tourist reports each year to the city’s subterranean canine inhabitants. Today, The Ed Koch Wolf Foundation in partnership with the NYC Fellowship is erecting monuments in city parks to serve as cautionary reminders to out-of-town visitors. When in NYC, visit our many beautiful green districts. Just let these stunning statues remind you as to why we close our parks at night. Statues are funded with the help of the public through the gift shop.

If you have followed our coverage of a certain Joseph Reginella over the past four years, you’ll know where this is going. This is the fourth in a series of hilarious sculptural hoaxes that the Staten Island sculptor takes over to Battery Park to trick tourists (and some locals, no doubt). The first was a monument to a giant octopus that attacked the Staten Island Ferry (gone unnoticed because it happened on the same day as the JFK assassination). A year later was a monument to an elephant stampede on the Brooklyn Bridge. Then a UFO abduction of a tugboat during the Blackout of 1977. “Basically what I am doing is I am creeping into these people’s minds. They are gonna go home to wherever they are from, they google it: ‘Ed Koch releases wolves,’” Reginella told us this past weekend as he gleefully watched passersby take in the sculpture.