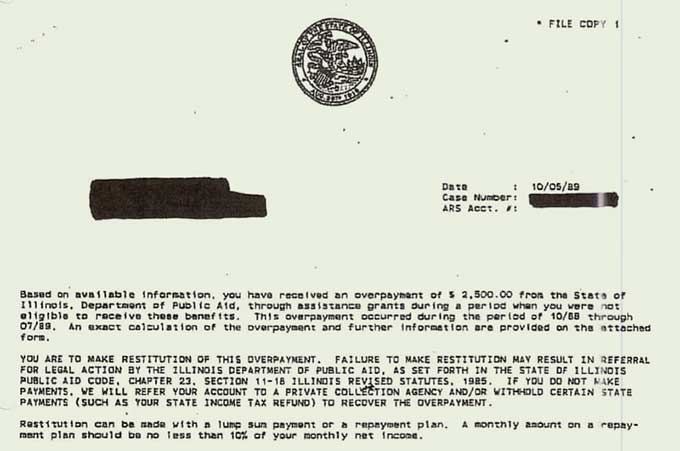 The US government has enlisted the aid of high tech companies to find and hound people it allegedly overpaid decades ago for food stamps and other assistance benefits. The letters inform recipients that they have no right to contest or appeal the alleged debts (often for thousands of dollars) because they were incurred over thirty years ago and the time period to appeal expired long ago.

If the recipient of the letter doesn't pay, the state will tell the Department of Treasury to withhold tax refunds, military retirement pay, and social security disability checks.

In the private market, a zombie debt is a debt that is past its statute of limitations, not owed, paid in full, or otherwise contested, yet which has found its way into the hands of a collection agency intent on pursuing payment by any means necessary.

Those agencies are known to harass, threaten and trick consumers into paying out-of-date private debts, which they buy for pennies on the dollar. In 1977, the Fair Debt Collection Practices Act was passed to protect people against the aggressive tactics collection agencies use – calling at all hours, contacting employers, deception, publishing debtors’ names – and to require that creditors prove that a debt is actually owed.

Unfortunately for Team 3335, the “overpayment” they’re battling is government debt; they enjoy none of these protections. If private zombie debt is surprisingly easy to kill – asking a collection agency for proof the debt exists can often make it vanish forever – government zombie debt is just the opposite, rising like a phoenix from the ashes of the most difficult times in people’s lives, over and over again.