Nazi bunker in Germany to become "design and lifestyle" hotel 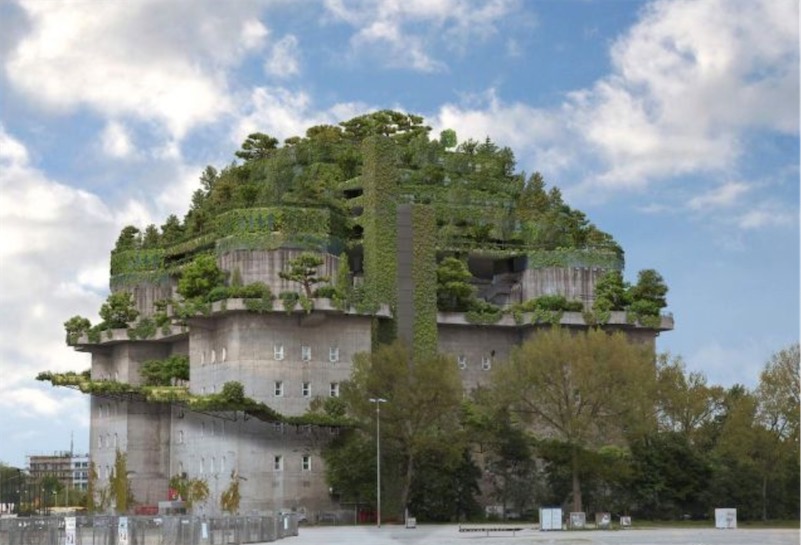 A developer plans to transform the massive Nazi-era St. Pauli anti-aircraft and air raid bunker in Hamburg, Germany into a "design and lifestyle hotel," as described by a spokesperson for the Spanish hotel chain NS Hotel Group designing the property. The structure is currently used as a concert venue and art/music studio space. According to the spokesperson, there are plans for the rebuilt facility, seen in the rendering above, to also hold a World War II memorial. The bunker hotel project comes on the heels of other Nazi-era structures that have been redeveloped. From the New York Times:

In 2018, the former Gestapo headquarters in Hamburg, where Jews, gay people, Roma and other people targeted by the Nazis were tortured and murdered, a cluster of high-end apartments, luxury boutiques and offices opened for business. Protests ensued.

A never-completed holiday resort that Hitler had intended to be used for workers through his “Strength Through Joy” project has been converted to luxury apartments.

The challenge when integrating these sites into modern-day landscapes is “how to reconcile commemoration and consumption or consumerism,” said Thomas L. Doughton, a senior lecturer at the College of the Holy Cross in Massachusetts who takes students on tours of Holocaust sites across Europe to explore the politics of memory.

Dr. Doughton said there were parallels to places in the United States, including plantations where African-Americans were once enslaved and the sites of atrocities against Native Americans, that have been commercialized at the expense of a blunt reckoning with historical oppression. Some of these places’ paying customers are descendants exploring their heritage.

Other travelers, he said, are drawn to the “pornographic” aspect of violence. “Dark tourism,” as the growing trade is known, involves profiting from places that were once sites of shame and horror, contributing to what Dr. Doughton calls the “gentrification of terror.”