Sweet stocking-stuffer: an LED flashlight that clips onto a 9V battery 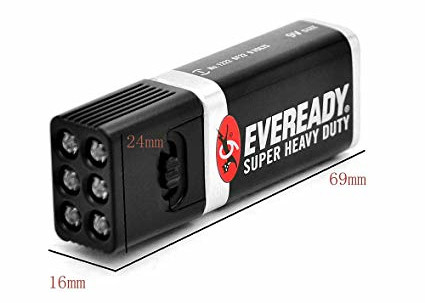 The Lixada LED Handheld Flashlight is a $9 stocking-stuffer ($29 for 4): a six-LED/36 lumen flashlight that clips directly over the terminals of a 9V battery, forming an easy flashlight rated for up to 10,000 hours (battery life depends on whether you're switched to 6, 4 or 2 LEDs). One reviewer uses 9V batteries swapped out of smoke detectors as power-sources for these. (via Kottke)