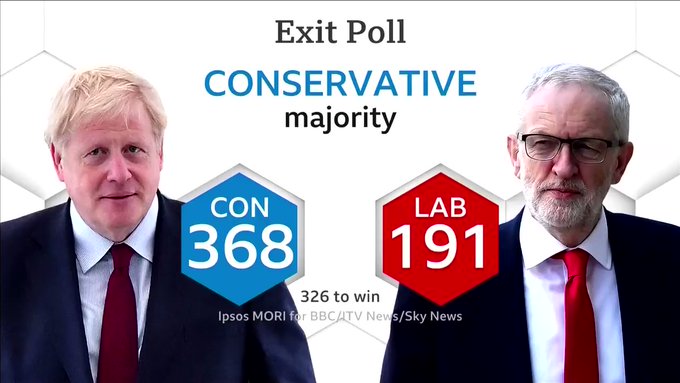 Exit polls show a clear win for UK Prime Minister Boris Johnson and the Conservative Party, report Reuters and other media outlets at this hour.

He also boasted of a "historic" election result, saying the Conservative government "has been given a powerful new mandate to get Brexit done."

Truly extraordinary #UKElection as Labour heartland seats tumble to Tories. A huge victory for Boris Johnson who is vindicated with a #Brexit mandate. A terrible result for Jeremy Corbyn who has, unsurprisingly, led his party to near oblivion. @australian https://t.co/ZC0OjC9AWc

"It's turned out to be a historic election that gives us now, in this new government, the chance to respect the democratic will of the British people," says Boris Johnson https://t.co/iqGncV1I7a #UKElection pic.twitter.com/C1qFZUEDZN

Our live results map is getting more colourful. Over half of constituencies have now declared and the Conservatives are projected to gain a majority of 80 https://t.co/wpZq4jVeZE pic.twitter.com/UQBdL42Bao

These are the MPs who lost their seats in the 2019 UK general election https://t.co/srY5DTzcgO

K we now have a new leader for strongest correlation, and I think this is narratively significant:

The share of workers in low-skilled jobs was a bigger predictor of swing than either Brexit vote or graduates.

Tune into BBC. What you’re seeing is an internecine fight within Labour playing out in real time. And if you think this is bad, wait until the days and weeks to come. https://t.co/Piqkn4Ll22