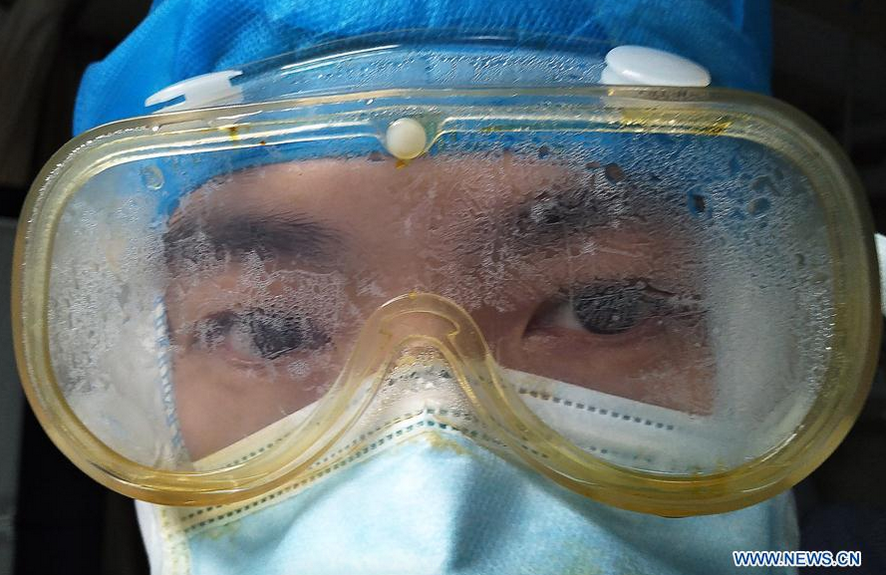 China's government health commission in Hubei province reported on Friday that the daily death toll from coronavirus rose by 116.

The Hubei province health commission did not report the total number of deaths from the newly identified virus, which was 1,310 on Thursday.

Of the new deaths, 88 occurred in the provincial capital of Wuhan, where the flu-like virus is believed to have originated late last year.

A further 4,823 cases had been detected in Hubei, taking the total in the province to 51,986. Over four fifths of the province’s new cases were in Wuhan.

The daily toll rose by a record of more than 240 on Thursday after the commission began counting cases diagnosed through new clinical methods.

The Hubei health authority has reported that 116 more people died of the coronavirus in Hubei province on Thursday.

PHOTO, top: Provided by the Government of China through Xinhua, the official state media outlet.

A doctor wearing goggles is seen at Xianghu Hospital of the First Affiliated Hospital of Nanchang University in Nanchang, east China's Jiangxi Province, Feb. 6, 2020. Amid the novel coronavirus outbreak, numerous medical workers are engaged in the combat with the virus. At around 20:00 on Feb. 5, an ambulance sped in Xianghu Hospital, along with seriously-ill patients infected with novel coronavirus pneumonia from Fuzhou of Jiangxi Province. Doctors and nurses immediately put on protective equipment to perform treatment. Three hours later, another batch of medical workers arrived to take the shift till early next morning. Around 2:00 a.m. on Feb. 6, the patients were out of danger and steady. "We will never easily give up as long as there is a glimmer of hope," said a doctor who just walked out of the intensive care unit (ICU ). (Xinhua/Wan Xiang)