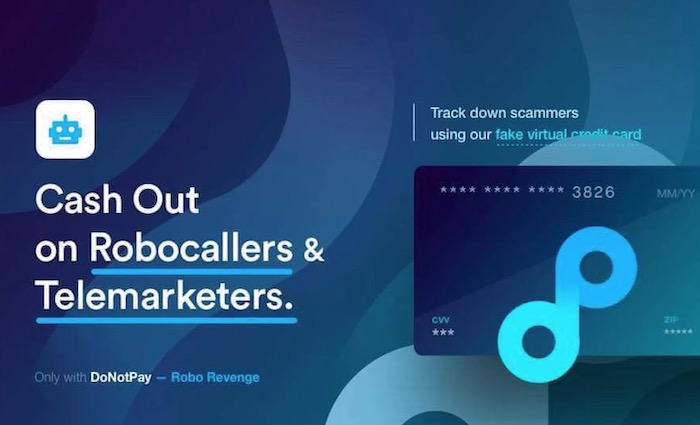 Robo Revenge is the latest brainchild of Joshua Browder, creator of the robolawyer parking-ticket-fighting app called DoNotPay. Robo Revenge gives you a burner credit card, which provides its robolawyer with the contact info for the telemarketer, and then files a suit against them.

Robo Revenge combines both features to automatically add you to the Do Not Call Registry, generate a virtual DoNotPay burner credit card to provide scammers when they illegally call you anyways, use the transaction information to get the scammer’s contact information, then walk you through how to sue them for as much as $3,000 per call under the Telephone Consumer Protection Act (TCPA), a law already on the books meant to protect consumers from calls that violate the Do Not Call Registry. The app also streamlines the litigation paperwork by automatically generating demand letters and court filing documents.

“There are two types of scammers. There are the scammers based abroad who are trying to get your bank details—those people you can’t sue because you don’t even know where they are. But the type we can stop is the businesses like a U.S. based travel company trying to sell you a cruise and asking for your credit card number,” Browder said. “We can take them out with U.S. based laws. If they’re calling someone and every time they’re calling someone, there’s a risk of a penalty, maybe they’ll think twice.”

Exciting news! We are launching a new service that gets you compensation from robocallers:

1. If a robocaller calls you, give them one of our virtual credit cards.

2. The card gets all their details and allows you to sue for up to $3k per call.