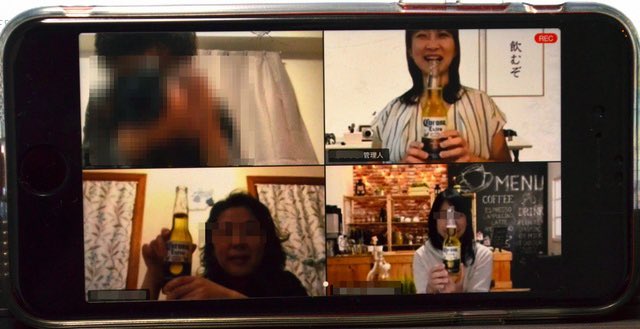 Supposedly driven by the virus crisis, On-nomi (オン飲み, "Drinking on[line]") is the practice of getting together with friends on the internet and having a drink together. It's the touchless, pathogen-free gathering of the immediate future.

As machine-translated from Asahi:

7:00 pm, Friday in early March. Eight people gathered in front of a PC or smartphone at home or in a shared working space raised corona beer bottles at each screen. It is said that it was triggered by the planning of on-drinking due to the spread of the new infection ... women in their forties living in and around Zushi City, Kanagawa Prefecture. Ayumi Nonaka (42), a web creator who has settled down on raising children, has held regular drinking parties and other events with women of the same generation in the area to deepen exchanges. Ayumi-san made a homepage such as "Remote work and haven't gone out of the house for about 3 weeks" "I'm fat because I didn't go out of school because I didn't go out of school" "Then, let's talk about Corona's worries online." Using "Zoom", which is used in corporate online meetings, it was spread out on SNS and other places to make it a place where anyone can participate.

The reliability of the Zoom teleconferencing app is making it suddenly ubiquitous in the news.