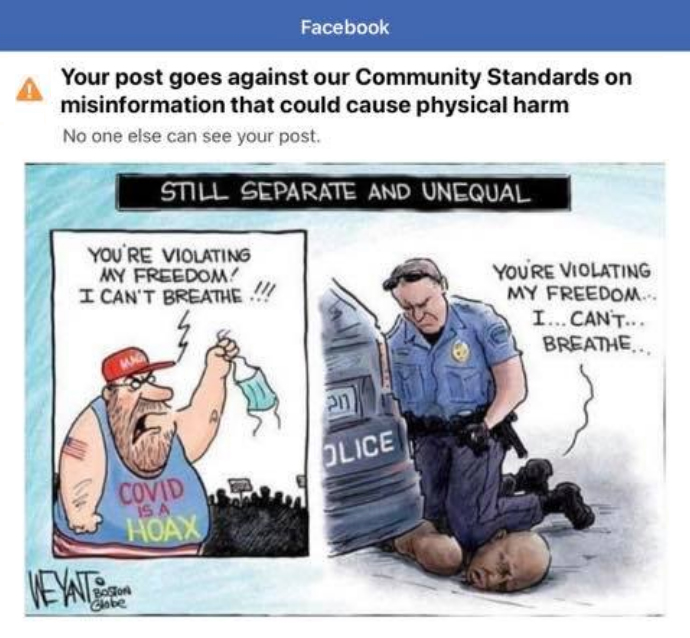 Shown above: A widely reported ban on this image from The Boston Globe (Real News since 1872) was identified as blocked content to users of Facebook trying to share the image during this weekend's protests. (Example)

Hi, everyone, it's not just the Boston Globe that's gotten the Facebook Banhammer-19 ...It's hit us, too! The Soundcloud links to episodes ten and eleven of SWWE have been blocked from distribution on Facebook, and they won't respond to any questions as to why. Such strong authority! So, to make some use of that, this episode will be focused on Facebook's lampoon-worthy precedent, Community Standards.

This week's episode discusses what it means to make art on the web, and the growing grip of censorship, as social media continues to shrink the landscape of the web into a more controlled and less independently strong place.

Learn about Facebook slowly encouraging you as a creative person to self-censor. Pick up some useful tools to find out if you've already been censored, by testing your links on their proprietary URL Linting Tool, and learn about Code Linting, in general, if unfamiliar.

Provided for free this episode are even two testing links, http://www.ep.tc/fb and http://www.ep.tc/bf, which are banned links on Facebook. You can use these to test how banned content is messaged and blocked to you by trying to post it on their site. We also go through the 25 various ways you can be blocked, to best pair you with your designated disapproval officer.

Finally, sure to be a holiday favorite, we share with you the Facebook Christmas Story of the $82 Model D, as an example of just buying an ad with Facebook to bypass much of their community standards scrutiny.

This couldn't be a tackier time for Facebook to try and stifle independent voices. Enjoy an hour, full of many jokes and information on how to spot their tricky gaslighting nonsense.

Connect with SWWE via banhammer on Bandcamp, Apple Podcasts, Stitcher and Google Play.

This episode is brought to by Mark Zucker-Buttons. Talk with you next week, Ethan