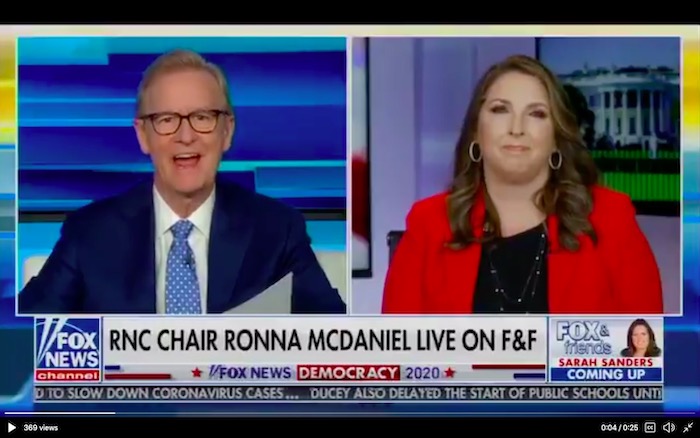 Yesterday, Fox host Trace Gallagher questioned whether Trump would drop out of November's presidential race. And today, Fox & Friends co-host Steve Doocy has pushed for Trump to wear a mask in at least two different segments.

“More states every day are mandating people, their citizens to wear masks and I think that if the president wore one, it would just set a good example,” he said to RNC Chair and truth spinner Ronna McDaniel. “He would be a good role model. I don’t see any downside to the president wearing a mask in public.”

Steve Doocy: “I think that if the president wore [a mask], it would just set a good example. He’d be a good role model. I don’t see any downside to the president wearing a mask in public" pic.twitter.com/ko8gbts865

And when speaking to Rep. Kevin McCarthy, he asks, "What about the President? He's made it clear he doesn't want to wear a mask, but his Federal government says everyone should wear a mask. Don't you think it would be a powerful symbol [if he] would put on a mask...? and then adds, ""It's symbolic, obviously it's patriotic because you're not only protecting yourself, you're protecting other people. ... It would be a powerful symbol."

Steve Doocy presses Rep. Kevin McCarthy on Trump's hesitancy to be seen wearing a mask: "It's symbolic, obviously it's patriotic because you're not only protecting yourself, you're protecting other people. ... It would be a powerful symbol." pic.twitter.com/737jsDMU4a

It's not that Doocy -- or any of the Fox puppets -- has suddenly grown a backbone. I think, rather, we can chalk it up to Sean Hannity, who seems to have more sway over Fox than Trump does. From Daily Beast:

Doocy’s remarks came the morning after Fox News host and Trump confidant Sean Hannity called on his viewers to wear masks in public.

“I was in the epicenter of this. I went to my grocery store every week. Guess what? They wore masks,” Hannity exclaimed on his Monday night show. “Nobody at my grocery store, thank God, got coronavirus. I think they work.”