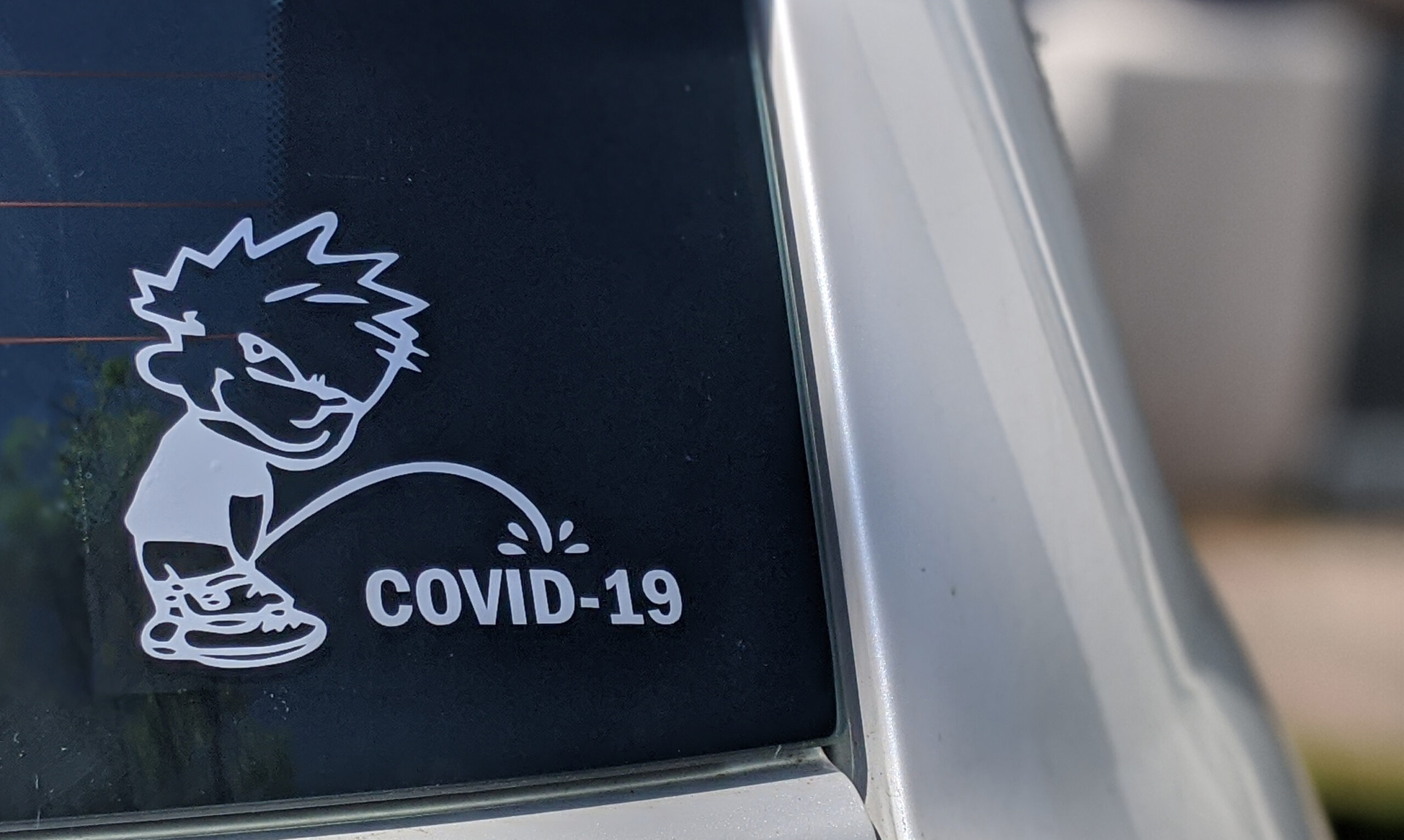 Twenty years ago The Onion wrote that the "terse but expressive decals" depicting "peeing Calvin" are a "vital part of our national dialogue, used by millions of Americans to exchange viewpoints and ideas about the important issues of the day." Funny and true. Well, it occurred to me recently that our impish friend Calvin should be urinating all over COVID-19, and I don't think I'm wrong!

Peeing Calvin meme is similar to peeing imp on 1870 map

Can the origin of the "Peeing Calvin" be traced to this gorgeous 1870 French propaganda map? Joshua Glenn thinks it's possible!

What is spiky-haired Sardinia/Corsica doing, with that evil grimace on his face? He’s dropped his pants! He’s peeing!

Mystery solved. The “Calvin Peeing” meme was inspired not by Calvin, but by a 19th century French satirical mapmaker’s caricature of Sardinia and Corsica. Or — more precisely — the “Calvin Peeing” meme is a mashup of the Sardinia-Corsica meme (I’m assuming this is just one of many examples out there, waiting to be discovered; I’d compare it to the “What Me, Worry?” kid meme) and Watterson’s comic strip character.

(2) Textbook stickers "inspired by both the creative FSM items posted to BB earlier and the dim-witted Georgia Dep't of Edumacation." Link to PDF designed for easy sticker printing. (Thanks Matt)

(3) Spotted at Camp Casey? Xon Lopez says, "Check out the 'Where we are from' map on the first page. If you look closely you can see the spaghetti monster beginning to emerge." Link.

(4) WWFSMD? Boing Boing reader Preya says, "I decided to put a 'sticker' on my blog to show my support for Flying Spaghetti Monster. I think this would be a great idea to share with other Pastafarians!"

(5)"What If God Wanted Pasta Sauce?", a song parody sung to the tune of "What If God Was One Of Us." A vocals-only version is also provided for remix hijinx. Link (Thanks, Alex)

(7) Creator of "Diesel Sweeties" comic creates a LiveJournal icon "Thou Shalt Have No Entree Before Me": Link (Thanks, Justin)

Instead of "My Boss is a Jewish Carpenter" the FSM version should be "My Boss is A Flying Noodle". You should have a contest to come up with FSM sanctioned replacements for: "WARNING!

Copyright cops crack down on cooks over cakes

Here's the sign I saw yesterday morning when getting the daily bread at College Bakery, our beloved local purveyor of pre-Atkins goodies.

Now the decor and ambience of College Bakery are echt Old Brooklyn, so it's an unlikely front in the copyfight, but the staff said they had to bust out the magic markers because they'd been roped in as the front line of defense against non-licit images of Dora the Explorer® and Thomas the Tank Engine®. I was struck enough by the sign to Flickr it immediately, and it's stuck with me since then, for several reasons.

First of all, disappointing children is a lousy tactic for a media company. If a child loves Nemo so much she wants a clownfish birthday cake, it's hard to see the upside in preventing her from advertising that affection to her friends. Second, and more worryingly, this is the very sort of chilling effect that has always been recognized as a significant risk in First Amendment protections. How cool would it be to do a drawing with your kid and have it show up as a cake the next day? Well forget it.

What College Bakery is saying with that sign is "The risk of being sued is so high that we'll give up on helping paying customers create their own cakes." This is Trusted Computing for frosting.

Creativity, in this world, is for Trained Professionals, whose work is owned by BigCos. Loss of amateur creativity is a small price to pay for protecting commercial IP holders.

Family tags: In a weird confluence of SoCal suburbia and meatspace metadata, people are tagging their cars with stick figure facsimiles of their family. What's next, the corporate version? (Stick figure CEO holds hand of middle manager holding hands with a legion of cube-dwellers...)

These stickers started appearing in Mexican cities around 2001 and spread like wildfire. Now they are everywhere and even political candidates have resorted to this kind of advertising. They are sold everywhere and are customizable with the name/nickname of your children and pets and whatnot. It is all pretty abnormal and ugly. I can only guess that this fad was brought to the US by chicanos returning from these last holidays in their hometowns.

For once Mexico is not 10 years behind the US, now we are like 3 years ahead in the bizarre family sticker business. When everyone started using these things on their cars, authorities advised to the contrary, they said it was an unnecesary risk to broadcast so much information about your family (names, how many boys, girls, aproximate ages, etc) to potential kidnappers. No one seemed to care.

I will look for some really odd ones on the street and send them if they are really good.

This site explores the evolution of those annoying and ubiquitous "Calvin peeing" stickers stuck on truck windows all over America. Explores the variations and corruptions, includes an excellent photo gallery.

My favorite part: the "generate-a-Calvin-peeing" engine, where you select who he hates (la Migra? The Navy? Ford trucks? "Fat chicks"?), whether it's the real Calvin or not, then generates a sticker for you on the fly. At left, the variant I probably see most often when I'm tooling down the freeway between L.A. and the border. OK, that and the "praying to Jesus" one, which actually does not involve peeing, rather, praying.