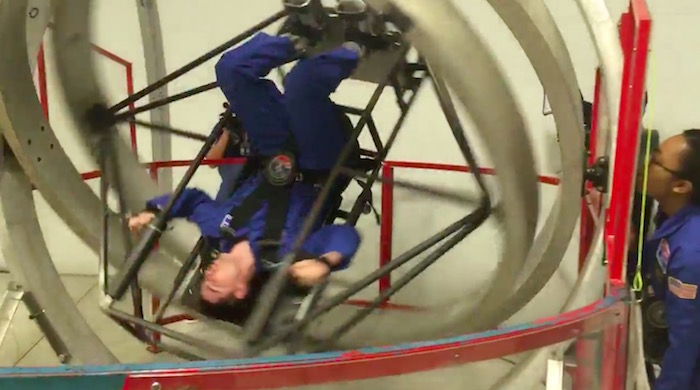 Gearing up in a flight suit inside a bathroom stall at the U.S. Space and Rocket Center in Huntsville, Alabama may not be the most authentic way to prepare for the perils of space, but it’s the closest chance I’ll ever get to living my dream of becoming a cosmonaut.

And since everyone’s dream is leaving Earth’s atmosphere and exploring, walking around in a blue onesie like you’re part of a cult doesn’t make you feel as stupid as I looked.

I actually found myself getting strangely overinvested in my role as a Capsule Communicator (CAPCOM), making sure our virtual space shuttle completed its mission and landed safely while part of the camp group conducted space missions and flew a mock shuttle.

Mission control was responsible for sifting through binder-filled specs to solve “anomalies” that would sporadically appear on our consoles while guiding the crew.

The camp offers different difficulty levels with more math-involved scenarios for advanced admirers of space, but for a camp group of journalists and bloggers, the lower level, “kid’s” missions suited us perfectly. It may even be a little embarrassing the number of times the camp instructors had to step in with some hints.

I also said “roger that” enough times to be committed to an insane asylum, but it was worth it to bring our crew safely back home.

We were just able to land our shuttle a little sideways on the runway after our low orbit missions were completed. Today we do it again for a Mars simulation. Read the rest