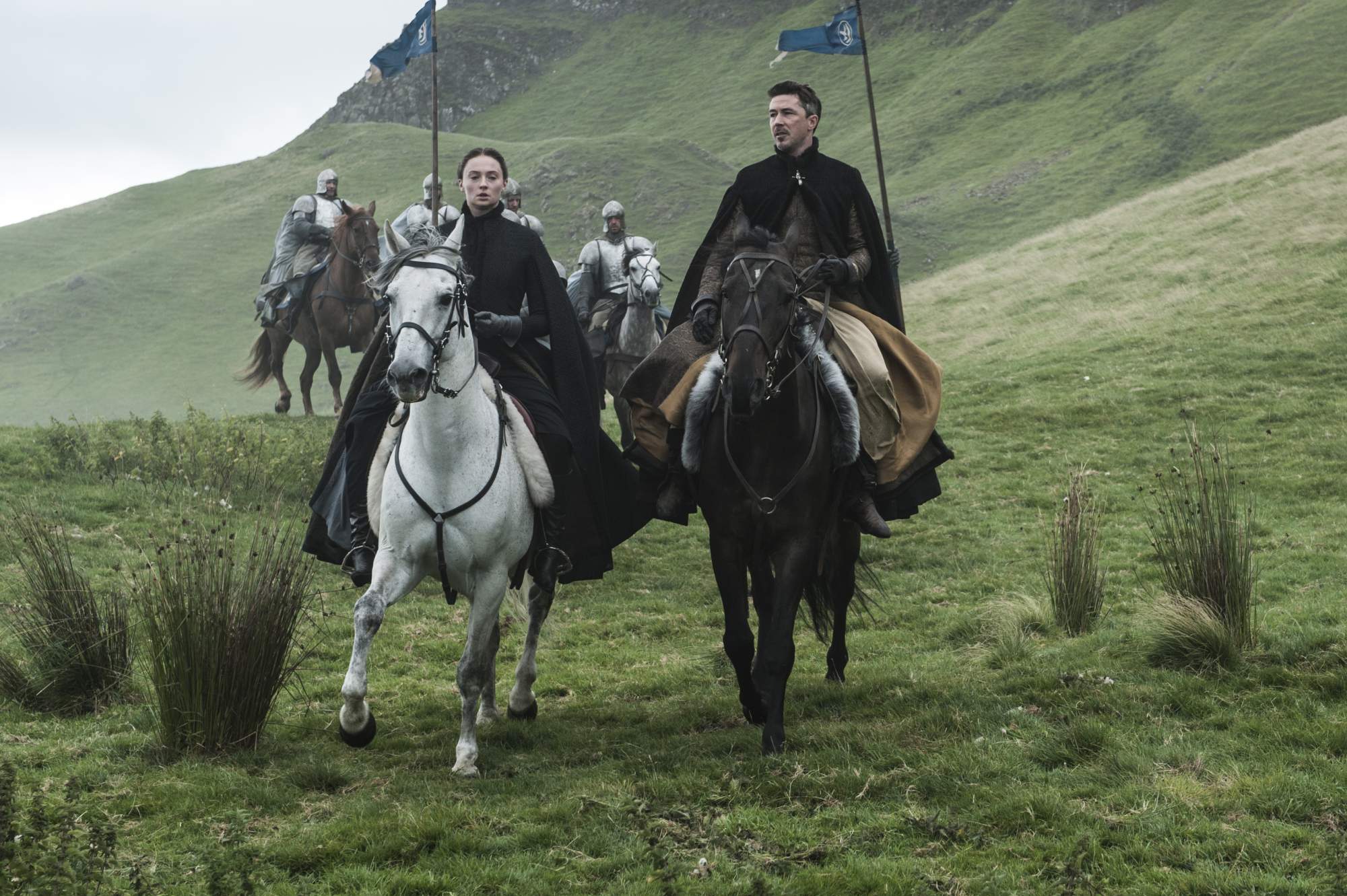 Someone gets his head chopped off, it's pretty cool.

Our usual Game of Thrones expert is no longer with us, so I'll be
standing in tonight. Pray that someone new is hired soon.

Badass Stark girl, having convinced Mr Hobo to let her into the chess temple, complains about the menial work and wants to be given some proper stuff to do. The esoteric mysteries of the cult are beyond her, though, and she is not enlightened by some bizarro zen remarks—nor by the sight of a corpse, of a fellow who drank some chess temple water.

In Knots Landing, Queen Mum Badass has to watch her son, King Tommy Dumbladdie, marry "Marge Tyrell." Our happy newlyweds fuck. "It all happened so fast," the very young king says. The new Queen is happy with this. She's cutesy but obviously pretty smart, in a way that suggests both genuine affection and a clear eye on the broader political cruelties in play. He suggests cake.

She praises his mother, Queen Mum, in a schemey kind of way. Later, Queen Mum—or is it Dowager Queen Mom?—debriefs him, and he suggests she'd be happier at "Casterley Rock," which Wikipedia says is the family's ancestral but distant seat of power.

Then Queen Mum and Marge have a cooly pleasant-but-unpleasant dialogue-cum-confrontation. Marge is pretty mean and catty! It's Dune-grade witch talk, a universe of strategic thinking between the smiles. Queen Mum knows she's been beaten, for now, but it also seems that Marge is overplaying her hand. Queen Mum paces off through the delightful gardens of Knots Landing, looking queasy but unbowed.

Up north, where everything is digitally graded in cold teal, the bad duke Bolton is aware that his family is doing really well for grim border thugs, and, further, that it's time to stop being like that and act more London. This means marrying off his freshly adopted bastard son to Sansa Stark, daughter of the rightful northern family he screwed over. Sansa is in the care of the smarmy schemer Baelish, who talks like that man in the pub who believes he does a great Batman impression. What is going on with his voice? It's so silly! He uses it to convince her to marry the bad duke's son.

In the cold, somewhere out in the moors, Wonder Woman and her squire have a long sad chat. Brienne (sp?) recounts how she was bullied, but empowered by a young prince's kindness, thereby becoming a serious badass. She's guilty she could not save him from a ghost: "Nothing's more hateful than failing to protect the one you love."

Even further up north, John Snow, now the Lord Commander of fantasy Hadrian's Wall, turns down a deal with wannabe King Stannis, who aims to depose bad duke Bolton and reinstall Snow--Sansa's illegitimate brother--as like subking of the north? Everyone acts like Stannis is boring, but he's actually pretty charismatic on television.

Back in Chess Temple, Badass Girl is confronted by a girl with an unpublishable name; it ends in her being exposed to Mr Hobo as Arya Stark, sister of Sansa and John Snow. Jesus, this show is complicated. I can see why everyone talks about it so much! Anyway, she is supposed to throw away all her stuff, abandoning her old vestiges of self before being truly eligible for advancement at chess temple. Chess temple is pretty sinister, if you ask me, what with all the bodies and face-shifting and stuff. Anyway, she fudges it by hiding her sword rather than chucking it in the sea. Then she joins Ms. Unpublishable in washing a corpse. It's really not clear what's going on, and that's clearly the point. They're like the assassins guild, or something? Or even creepier?

Back in fantasy England, Sansa meets her betrothed, the bad duke Bolton's son, in what was her childhood home, Winterfell, which is, of course, now occupied by the Boltons.

John Snow, Lord Commander of the night's watch, makes a ginger joke, the fuckin' dick. But he also gives his old enemy, Captain Grizzlyguts, a nice job. This signifies Snow's immeasurable magnanimity. Then his gives his old enemy's bald buddy a crummy job. Baldy gets really angry and makes a big show of refusing his orders. Baldy loses his bravado, however, when John Snow has his head put on the block. Everyone expects him to be given mercy, especially after a plaintive and rather endearing speech about his lifelong fear. But Snow executes baldy! It's pretty shocking! John Snow, just but merciless Lord Commander! Heather says she's not even sure he's Chaotic Good anymore.

Over in Knots Landing, a sleazy "just a block from the House of Commons"-type kinky brothel gets invaded by religious fundamentalists. They find a top priest there and make a public spectacle of him, driving him naked through the streets and whipping his bum with reeds. Later, having recovered his dignity (and clothes), the priest complains to Queen Mum Badass and her cabinet. But she meets with the chief religious fundamentalist Jonathan Pryce instead, presumably having identified a potential new ally. She then has her spy chief-cum-corpse reanimator (cf. Elizabeth and Dee!) send a messaege to smarmy lord Baelish.

Up north, bad duke Bolton has figured out that Baelish is, well, just shifty as all hell. They both know they're dependent on one another, but they cannot trust one another. Looking skeptically into one anothers' eyes, they have what Heather insists is "a little sexy moment." "I felt it," Heather said. "They don't want to admit it, but they did."

Thousands of miles away, Awesome Very Short Drunk (Dinklage, from the memes) and Adorable Eunuch arrive, exiled from fantasy England, in that generic near-eastern city where the posh British girl-queen rules in vaguely unconvincing colonial smugness.

"It's even better luck to suck a dwarf's cock!" retorts Dinklage, to a too-easy setup provided by an insulting brothel bouncer. But it's pretty boring as brothel scenes go, he can't get it up!

"What will I do in my spare time?" He's becoming too sappy for his own good. And then he gets kidnapped, while taking a slash outside. Turns out that it's the handsome former retainer who worked for, but was found to have betrayed, the queen (smug, British, of near-eastern city), to whom Dinklage will now be taken. End of show!

Resumés to rob at boingboing net