Pie Face – If you get the wrong number, this slapstick comedy game will fling a faceful of whipped cream 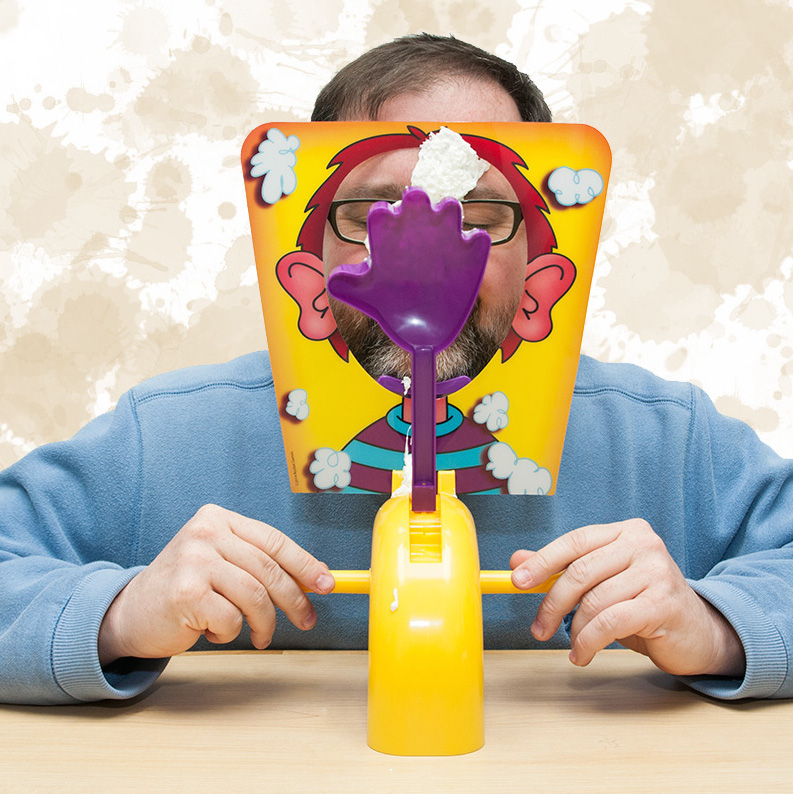 A cream pie in the face! It’s an ageless slapstick comedy routine that is also the inspiration for Hasbro’s Pie Face Game. Thanks in part to a viral video that’s making its rounds on social media, this equally ageless game is destined to be a hit this holiday season. Pie Face is as easy as pie to setup and play, although clean-up will be required. To get started, players attach the purple Chin Rest and Splash Card Mask to the Pie Thrower base, which comprises two handles and a throwing arm in the shape of a hand. After setting the throwing arm in place, you add the pièce de résistance: a dollop of whipped cream from your kitchen.

The rules of the game dictate that the youngest player goes first. A numbered spinner determines how many times a player must turn the handles of the pie thrower. Each player then places his or her chin on the Chin Rest with face protruding through the opening in the splash card (which is thankfully made of laminated, washable plastic). A point is awarded for each successful click of the handle that does NOT result in the player getting a face full of whipped cream. If a player completes a turn without getting hit, the points double. For the faint of heart, partial turns are allowed. For example, if a player spins a 4, he or she may elect to turn the handle only 2 times. But, this strategy comes with a price: you can’t score double points.

As you might expect, getting “pie-faced” results in a round of laughter by your opponents and no points added to your running tally. The first player to 25 points is declared the winner (and, in my house, is absolved of cleanup duty.)

One final note: Pie Face also comes with a small sponge that can be wet and used as a whipped cream alternative. But where’s the fun in that?!?