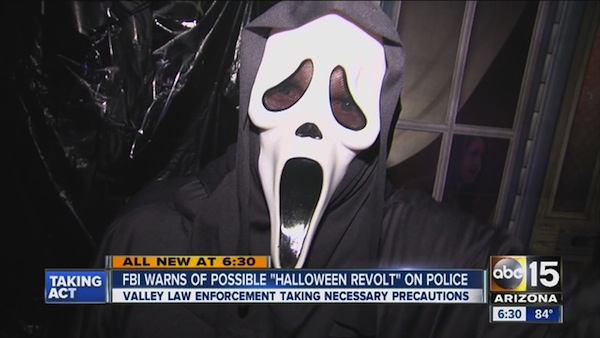 The FBI has warned the New York Police Department that a group called the National Liberation Militia has planned a "Halloween Revolt" that involves attacking NY police officers, and news organizations are lapping it up.

According to a "NYPD Officer Safety Alert" the National Liberation Militia has "no known New York City members" and "there is currently no known nexus between this threat and the NYPD or New York City." Nevertheless, NYPD officers are "strongly encouraged to remain vigilant" for the non-existent ruffians.

From Jesse Walker at Reason:

That's quite a tale. It's almost as if someone took one of those old urban legends about gang initiations, mashed it up with those recurring fears of a war on cops, and replaced the gangsters with a cabal of well-worn political villains. (Anarchists! Militias! No, wait: an anarchist militia! For "national liberation," 'cause anarchists are all about nations, right?) And then baked the batter in what may be America's biggest urban-legend-producing oven, Halloween.