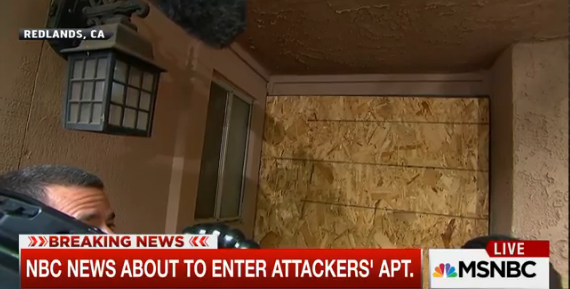 "We regret that we briefly showed images of photographs and identification cards that should not have been aired without review," said MSNBC after doing precisely that earlier today in San Bernardino.

“MSNBC and other news organizations were invited into the home by the landlord after law enforcement officials had finished examining the site and returned to control the landlord,” an MSNBC spokesman said in a statement to the Hollywood Reporter.

MSNBC just showed the driver's license of Syed Farook's mother, Rafia Farook, and her SS# in a live broadcast

We may have done bad, we weren't first, MSNBC goes on to say. By the way, when has any cable news network ever bragged at not being first?

“Although MSNBC was not the first crew to enter the home, we did have the first live shots from inside,” the statement says.

News organizations who entered after boards nailed to the doors were removed were widely criticized on social media today.

MSNBC and CNN both aired live footage from inside the rented townhouse where mass killers Tashfeen Malik and Syed Rizwan Farook lived.

Inside the home of the #SanBernardino killers — watch live: https://t.co/aFXMKV3XSW pic.twitter.com/NAdqS3SMGI

The news crews walked through the deceased attackers' former residence, showing photographs and personal effects, including a California driver's license belonging to the grandmother of the infant the killers left behind.

The husband and wife were shot by police in a gun battle that followed their shooting and IED attack which left 14 dead and 21 wounded, on Wednesday in San Bernardino, California.

Neighbors are also showing up and walking through. Again, the building owner let us in (and is doing interviews outside.) Unprecedented.

(I'm here with another 100 reporters, by the way. Building owner let us in.)

So @MSNBC seems to be doing something unwise.

What the news crews did was very unwise. But was it illegal?

are they literally tampering with evidence live on MSNBC?

Doyle Miller, the killers' former landlord, at first said he hadn't given reporters permission to enter. MSNBC reporter Kerry Sanders, whose conduct on-air was pretty much the worst of the lot, said that wasn't true. “He’s given us permission to come in and also to touch this stuff, so it’s not as if I’m touching things I shouldn’t be touching.”

Authorities found thousands of rounds of ammunition, 12 pipe bombs, and material with which to build IEDs when they investigated the apartment on Thursday. They entered with a search warrant. This was just 24 hours prior to today's media feeding frenzy.

No law enforcement officers were at the apartment when news crews entered.

The door to the suspects' apartment was resealed by citizens after the news crews cleared out.

In Ohio, a racist 20-year-old man was arrested over the weekend for threatening to attack a Jewish community center, in a post on Instagram.