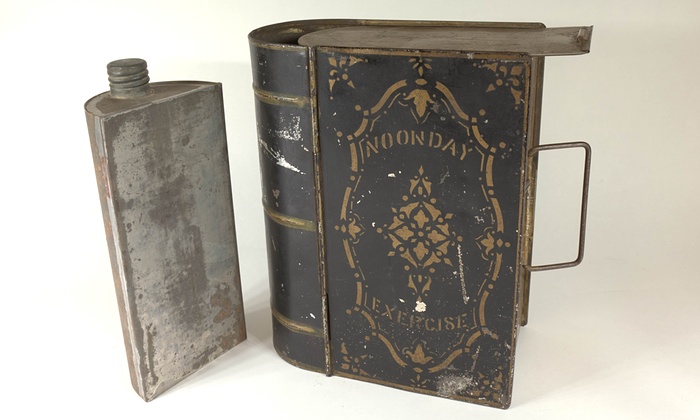 About Blooks is a blog devoted to "blooks," objects that look like books but aren't, such as book-shaped handbags, hollow books used to hide valuables, and booze flasks that are disguised as books.

Mindell Dubanksky, a preservation librarian at the Metropolitan Museum of Art who is the proprietor of About Blooks, has a show of her treasures on at the Grolier Club in NYC, which has an accompanying book called "Blooks: The Art of Books That Aren't."

The current display of 130 faux books covers both sculptural and functional blooks. They have been organized into 14 themes, including religious blooks (a maple sugar mold in the shape of a Bible, circa 1820), household blooks (a mid-century book-shaped alarm clock made by Lava Simplex, better know for its lava lamps), and gags (exploding blooks containing paper caps triggered upon opening). The most common use of the form is secret storage – there are book-shaped banks and safes to deposit money or stow secret documents, as well as book-shaped flasks, to hide your habit. One handsome leather-bound blook decorated with gold tooling is really a lady’s compact, concealing powder, rouge and a mirror. Another, titled The Informer, is a motion-detector alarm camouflaged in a maroon cloth-bound book.

And even those are “only the tip of the iceberg in terms of available blooks”, said Dubansky. “It is intended to introduce the subject in the broadest way as far as my collection allows.” What’s missing from the show, she noted, are the bulkier blooks – pieces of fine art in book form, architectural objects, stage sets and furniture. Her collection numbers around 600.

About Blooks:
Discovering the book as object