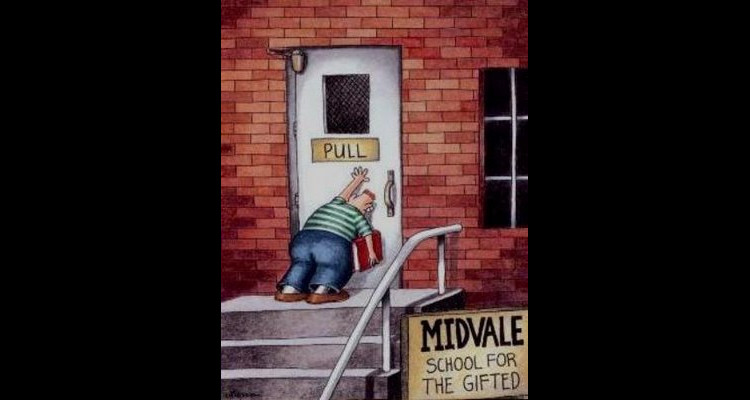 In Understanding overconfidence: Theories of intelligence, preferential attention, and distorted self-assessment, an open access paper published in the Journal of Experimental Social Psychology, psych researchers from Washington State U, Florida State U and Stanford report on their ingenious experiments to investigate how subjects' beliefs about intelligence affect their own intelligence.

Specifically, the researchers investigated what effect a belief in "fixed" intelligence (the idea that your intelligence is fixed, possibly at birth or before, and doesn't change over your life) had on problem-solving, versus a belief that intelligence is trainable and can be changed through practice.

Interestingly, when the researchers directed subjects to focus their efforts on easy problems at the expense of hard ones, the subjects finished up with overestimations of their own intelligence, regardless of their beliefs about intelligence.

The people who freak out at the idea of class analysis, privilege and affirmative action often espouse the idea that promoting people who haven't attained the same success markers is anti-meritorcratic, promoting "less qualified" candidates over "better qualified" ones. But if intelligence and capability are trainable, and if starting on an easy setting makes you prone to overestimating your abilities, then promoting people who've been solving harder problems will fill your positions with people more likely to believe that they can make themselves smarter by applying themselves to your organization's hardest problems.

The issue of overconfidence appears to be a secondary effect of a person’s thoughts on intelligence. When participants were instructed to focus on the easiest parts of a task, they also began to show the same thought patterns as people who fundamentally believe that intelligence is fixed and overestimated their abilities. Receiving the opposite instruction reversed this outcome. When participants were instructed to spend most of their time on the most challenging part of a task, their confidence fell, and they were better able to assess their own skill level accurately.

In the classroom and workplace, intellectual overconfidence is a problem because it prevents people from learning effectively and developing their abilities—in order to learn and grow, you need to first acknowledge gaps in your knowledge and skills that you lack. Limiting the problem of overconfidence could help everyone develop. But it’s probably best to address the underlying issue while people are young—students may learn more effectively if they are taught to have a growth mindset and abandon the idea that intelligence is fixed.

Teaching students to have a growth mindset could potentially have a significant impact on some of the most vulnerable student populations that have the hardest time staying in school but have the most to gain from a strong education. Completing additional years of education has been widely shown as the most reliable way to increase professional opportunities and financial security.

(Image: The Far Side)