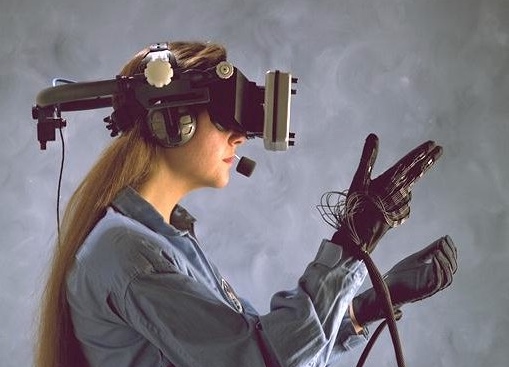 
Shortly after the event, David (Lawrence), Jim (McKee), and Earwax received an NEA grant to make a radio show. The funding enabled all of the video to be logged and transcribed. From it they made several versions, organized in short 1-4 minute themed sections. Their style was very “pre RadioLab”. From the New American Radio website:

Earwax Productions with David Lawrence. An exciting production created in the spirit of the technology it focuses on. Virtual Paradise examines the ideas, issues, and attitudes that currently surround virtual reality. As this technology evolves, it brings with it the potential for redefining our most basic assumptions about media, experience, and reality. Virtual Paradise features many voices recorded at Cyberthon, a 24-hour virtual reality event presented by Whole Earth Institute in 1990. It also includes interviews with such visionaries as science-fiction author William Gibson, VR architect Jaron Lanier, artificial reality pioneer Myron Krueger, and Timothy Leary—all intercut with music and sound effects and shaped into a highly entertaining and insightful "virtual" tape composition. Virtual Paradise was the winner of the 1994 AIR Award for Innovation and Excellence.

Having listened to “Virtual Paradise” for the first time in 20 years, it’s striking how the VR conversation has changed. Jim, David, and I still occasionally work together (recently with Google’s VR group), and we’re interested in getting this out, possibly with a remix, or video version, or installation, or VR version. All the source files have been digitized and remain intact.