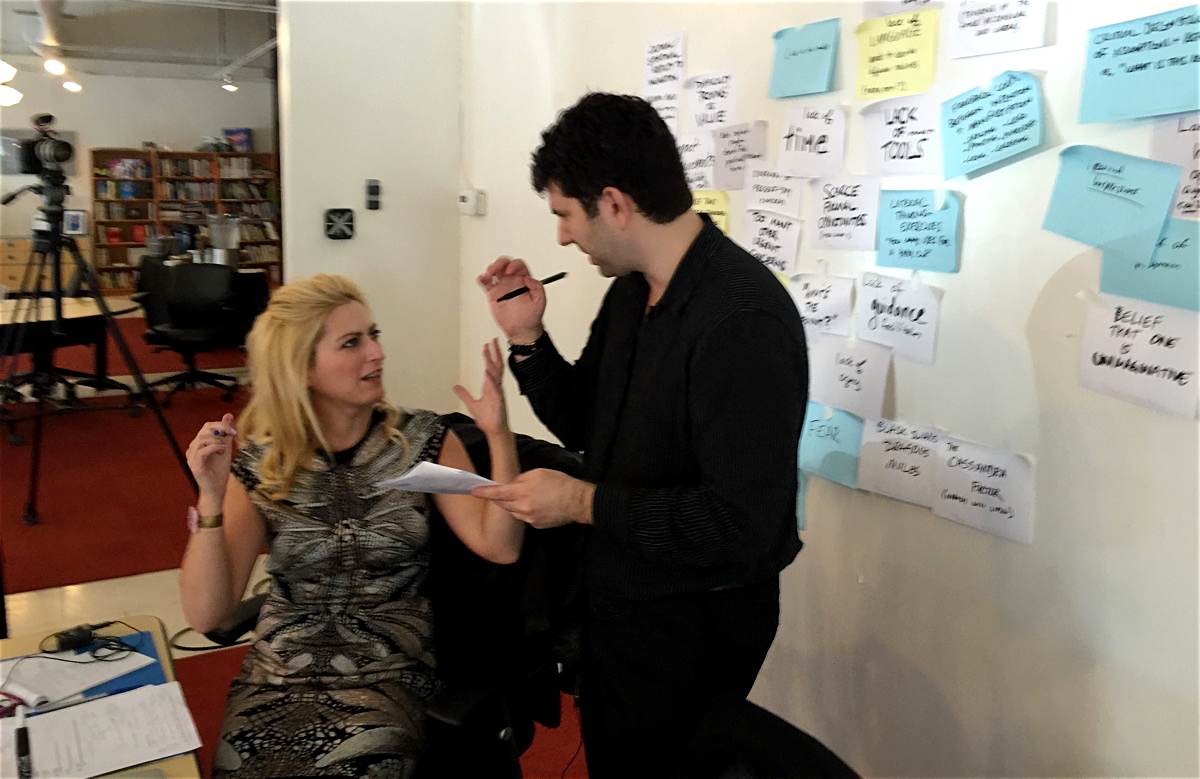 I wish Scott Barry Kaufman had been my college professor. Scott told me that he gives extra credit for daydreaming in his classes. That would have been an easy A for a space-case like me.

Scott is the scientific director of The Imagination Institute in the Positive Psychology Center at the University of Pennsylvania. The Imagination Institute’s mission is to “make progress on the measurement, growth, and improvement of imagination across all sectors of society.” One of the ways it’s doing this is by conducting retreats with different groups of people — such as educators, evolutionary psychologists, standup comedians, and futurists — to learn how they use their imaginations in their work.

In May 2016, I participated in The Imagination Institute’s two day “futurists retreat,” held at Institute for the Future’s Palo Alto headquarters, where I’m a research director. I arrived on Tuesday and met the other participants. Leading the retreat along with Scott was Jane McGonigal, IFTF’s director of game research and development. Jane’s a game designer and author of two New York Times best-selling books about self-development though imagination, creativity, and play. We were joined by IFTF staffers Tessa Finlev, Dylan Hendricks, Sarah Smith, and Kathi Vian, along with futurists Stuart Candy and Jamais Cascio, Imagination Institute’s Elizabeth Hyde, and James W. Hovey of the Eisenhower Fellowships.

What follows is my account of the retreat, and the five memorable insights I gleaned from the experience.

Insight 1: Imagination is not a property of a single brain

In the morning Jane led a group exercise to introduce The Imagination Institute to the idea of futures thinking. Everyone was given a pad of giant sticky notes and asked to write down the reasons why some people can’t (or don’t want to) imagine the future.

I uncapped my pen and wrote “Belief that futures thinking is a waste of time,” and “Not necessary because we already know how to be successful.” After a few minutes Jane collected the sticky notes and we all discussed how the notes should be organized into related clusters. As Jane arranged the notes on the wall, the clustering triggered even more ideas for sticky notes. In fact, the most interesting sticky notes were generated after the first round had been put on the wall. Seeing the big picture that was developed by the group helped kick our creative juices into gear. While it’s true that imagination is sometimes sparked by thinking on your own, it’s also true that collaborative thinking can lead to “lightbulb moments” that no individual would have thought of on their own. Stuart Candy, a professor at OCAD University in Toronto, remarked, “imagination is not a property of a single brain.”

The major reasons people had difficulty imagining the future included:

Insight 2: Empty the bucket of the obvious so you can get to the good stuff

Later in the day, we played an imagination game co-created by Stuart Candy, called The Thing From the Future. The object of the game, which comes in the form of a thick deck of playing cards, is to “generate the most interesting, funny, or thought-provoking ideas for artifacts from the future.” The cards are color-coded into four groups: Terrain (e.g., agriculture, community, fashion), Object (e.g., law, gift, beverage), Mood (e.g., calm, unease, outrage), and Arc (e.g., grow: a few years, collapse: a generation, discipline: a millennium). We started with two cards, Object and Arc, and gave ourselves a few minutes to write down as many ideas as possible. Our first pair of cards were “the zoo” and “transformation: a decade.” I wrote the following:

Interestingly, almost everyone wrote down the same first idea (putting people in cages), and it was usually the first item on their list. Jamais Cascio, a distinguished fellow at IFTF said this is common in forecasting exercises, and described it as “emptying the bucket of the obvious.” Once you do that, you can draw from a deeper source.

Insight 3: The absence of limitations is the enemy of art

We played another round with The Thing From the Future, this time with three cards instead of two. We learned that our ideas were stranger, more interesting, and more detailed than the ideas prompted by playing with two cards. The additional constraint imposed by introducing a third card had the curious effect of producing better ideas. Stuart Candy recited a quote from Orson Welles that summed up this phenomenon: “The absence of limitations is the enemy of art.”

The cards were especially effective in helping the group imagine ways in which the world could be different. “In order to make a change in the world or invent something new, you have to be able to imagine how things can be different,” Jane told me after the retreat. “And the future is a place where everything can be different.” And it doesn’t matter whether or not the futures one imagines actually happen, she says. “Thinking about the future shouldn’t be about trying to be correct. It should be about trying to be creative, and surprising. If you imagine many possible futures, you open up the space for innovation, creativity and change.”

Insight 4: Possibility Thinkers are not quite the same as reality discoverers

On the morning of the second day of the retreat, before things got started, I pulled Scott into a meeting room and interviewed him. (You can listen to my audio interview with Scott on the Institute for the Future podcast. Or click the Soundcloud player below.)

I asked Scott what his impression of futurists was so far. He said, “This group is very pro-socially oriented, yet it’s an interesting combination of systems thinkers and pro-social orientation. It’s like what you get when you combine evolutionary psychologists with a prosocial orientation. A lot of the common themes among people here were also common themes among our evolutionary psychologists — problems that meets multiple possibilities, generate multiple hypotheses of how the world could work, and having objectivity when you formulate these ideas. The goals that [futurists] choose are more pro-social in nature, like ‘I want to figure out all the possibilities of helping a third world country by imagining a possibility that doesn’t currently exist in that world.’ There are more possibility thinkers here, whereas I think scientists tend to be more reality discoverers. I feel like that’s the key difference. The drive for reality discovering versus possibility thinking — they’re not quite the same thing."

When Kathi Vian, a distinguished fellow at IFTF heard what Scott had said, she told me, “I think this goes to the heart of some of the debates we find ourselves in about ‘We don’t do prediction’ — possibility thinking might be a better way to frame what we do… we don’t assume there’s one future reality to be discovered, but rather a field of possibilities, and [as futurists], we help people exercise their imagination muscles to widen that field of possibilities.”

Later that day we were asked to break into sub-groups to design a method for tracking, scoring, analyzing, and evaluating imagination. To be honest, I don’t remember what my contribution to this exercise was, because it paled in comparison to what one of the other subgroups had developed in under an hour. They called it a “forecast quality map.” It was in the shape of a pentagon. I’ve illustrated it here, based on my hand-drawn notes:

Prototype of a forecast quality map, developed in under an hour

Each vertex of the pentagon measures one aspect of a forecast:

The three example maps show how a forecast might be mapped. Forecast A is strong in every aspect, but suffers from being overly simplistic. Forecast B is emotionally powerful, but lacks logic and complexity. Forecast C is complex and logical, but perhaps not as stimulating as it could be. This forecast quality map is a rough prototype, of course, and we discussed ways it could be refined, but I feel that something along these lines could be developed into a something useful.

Near the end of the day, we talked about imagination as a tool that we can use to create the future. For example, health organizations in the 1970s imagined changing the way people thought of cigarette smoking, which was considered at the time to simply be part of adulthood. The organizations succeeded. Today, smoking is considered disgusting and dangerous. Such a profound transformation in attitude is evidence that people can combine imagination with action to make a better future.

After the event, Jane told me her goal in joining forces with the Imagination Institute was “to help build the body of knowledge we have on how imagining a reality that doesn’t exist yet might help people become more creative, more inventive, and more empowered to make changes in the world around them. Imagination is fun and satisfying, but it’s also a practical skill. We can make any future we can imagine. And we can imagine any future we want!”

Learn how you can imagine futures at IFTF.org.

Institute for the Future

Making the gig economy work for everyone

The platform economy can have something for everyone. People needing goods or services get what they want, people who have the time and skills to provide the goods and services get paid, and people who built and invested in the platforms that connect customers with providers get a cut of the action. Win-win-win, right? Well, […]

Bitcoin is the sewer rat of currencies

Andreas Antonopoulos is one of the most respected experts in bitcoin and blockchain technology, and he regularly shares his expertise with businesses and organizations around the world. His 2014 book, Mastering Bitcoin, was called the “best technical reference available on bitcoin today,” by Balaji Srinivasan, the CEO of 21.co, and received high praise from Gavin […]