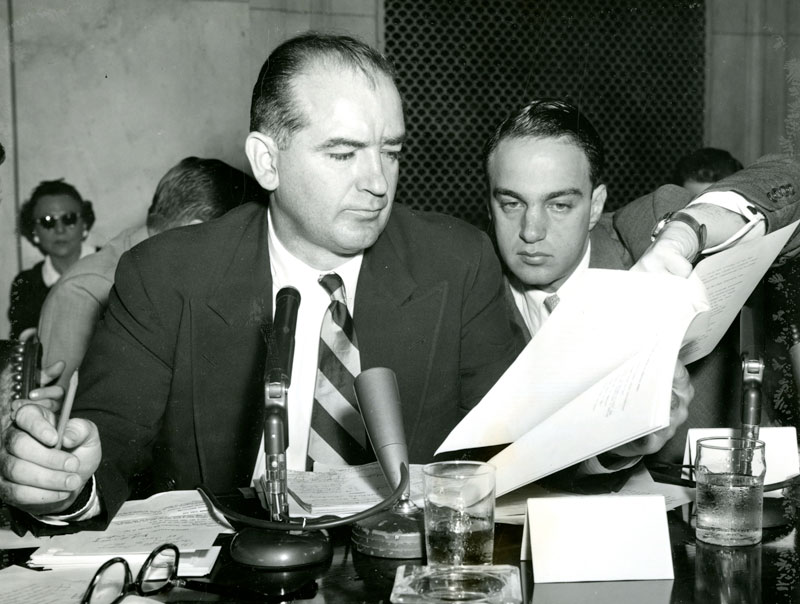 He's been called “one of the most loathsome characters in American history.” Roy Cohn made his bones working as a prosecutor in the Rosenberg espionage case, and served as Senator Joseph McCarthy's right-hand man for years. He helped send the Rosenbergs to the electric chair for spying, and helped Richard Nixon become president.

Decades later, Mr. Cohn’s influence on Mr. Trump is unmistakable. Mr. Trump’s wrecking ball of a presidential bid — the gleeful smearing of his opponents, the embracing of bluster as brand — has been a Roy Cohn number on a grand scale. Mr. Trump’s response to the Orlando massacre, with his ominous warnings of a terrorist attack that could wipe out the country and his conspiratorial suggestions of a Muslim fifth column in the United States, seemed to have been ripped straight out of the Cohn playbook.

“I hear Roy in the things he says quite clearly,” said Peter Fraser, who as Mr. Cohn’s lover for the last two years of his life spent a great deal of time with Mr. Trump. “That bravado, and if you say it aggressively and loudly enough, it’s the truth — that’s the way Roy used to operate to a degree, and Donald was certainly his apprentice.”

The Washington Post also ran a piece over the weekend about the creepy McCarthy-Cohn-Trump connection:

They came together by chance one night at Le Club, a hangout for Manhattan's rich and famous. Trump introduced himself to Cohn, who was sitting at a nearby table, and sought advice: How should he and his father respond to Justice Department allegations that their company had systematically discriminated against black people seeking housing?

"My view is tell them to go to hell," Cohn said, "and fight the thing in court."

It was October 1973 and the start of one of the most influential relationships of Trump's career. Cohn soon represented Trump in legal battles, counseled him about his marriage and introduced Trump to New York power brokers, money men and socialites.

Cohn also showed Trump how to exploit power and instill fear through a simple formula: attack, counterattack and never apologize.

An April feature by Michael Kruse at Politico covered this same territory, and is well worth reading. A snip:

Roy Cohn, the lurking legal hit man for red-baiting Sen. Joe McCarthy, whose reign of televised intimidation in the 1950s has become synonymous with demagoguery, fear-mongering and character assassination. In the formative years of Donald Trump’s career, when he went from a rich kid working for his real estate-developing father to a top-line dealmaker in his own right, Cohn was one of the most powerful influences and helpful contacts in Trump’s life.

Over a 13-year-period, ending shortly before Cohn’s death in 1986, Cohn brought his say-anything, win-at-all-costs style to all of Trump’s most notable legal and business deals. Interviews with people who knew both men at the time say the relationship ran deeper than that—that Cohn’s philosophy shaped the real estate mogul’s worldview and the belligerent public persona visible in Trump’s presidential campaign.

“Something Cohn had, Donald liked,” Susan Bell, Cohn’s longtime secretary, said this week when I asked her about the relationship between her old boss and Trump.

From a 2009 piece on Roy Cohn by Robert Sherril at The Nation:

Cohn "lived in a matrix of crime and unethical conduct," "derived a significant part of his income from illegal or unethical schemes and conspiracies," and thrived "cheek by jowl with so many men of sharp practice and dim luster in business and politics" that Cohn's pal Joey Adams, the comedian, would say of Cohn's dinner parties, "If you're indicted you're invited."

But important unindicted people were invited, too. And they went. Large slices of the upper crust of New York and Washington snuggled up to him, laughed and entertained one another with stories about his crimes as though they were choice insiders' jokes, and wrestled for the privilege of partying with Cohn and his crooked and perverse friends. Why choose his company? The sleaze of Roy Cohn was no secret. Why ignore it? Why excuse it? The only important questions forced on us by these books have nothing to do with Roy Cohn, but everything to do with judges and lawyers and publishers and writers and TV stars and politicians and developers–the wealthy and the powerful people who for many years ate Roy Cohn's shit with a grin.

Cohn was attorney for Studio 54, which von Hoffman identifies as "perhaps the most glamorous, fashion-setting nightclub to popularize drug use among white-collar people." Cocaine was its mother's milk. "That the establishment was run on lines contravening half the laws in the statute book made it not one whit less popular." For special celebrities, the wildest parties were held in the basement, where, along with high society's homosexuals, transsexuals and transvestites, one could find many illustrious souls who were there for the kick of watching and smelling. It was in Studio 54's catacombs, writes von Hoffman, that Cohn held some of his biggest birthday bangs, attended on at least one occasion by "the important officials of the Democratic, Republican, and Conservative parties, most of the city's major elected officials, a number of congressmen, the Chief Judge of the United States District Court and Roy's usuals, comedian Joey Adams, columnist William Safire, Donald Trump, Si Newhouse, Sidney Zion, and doubtless many another that the excluded Voice reporters did not pick up on standing outside in the street."