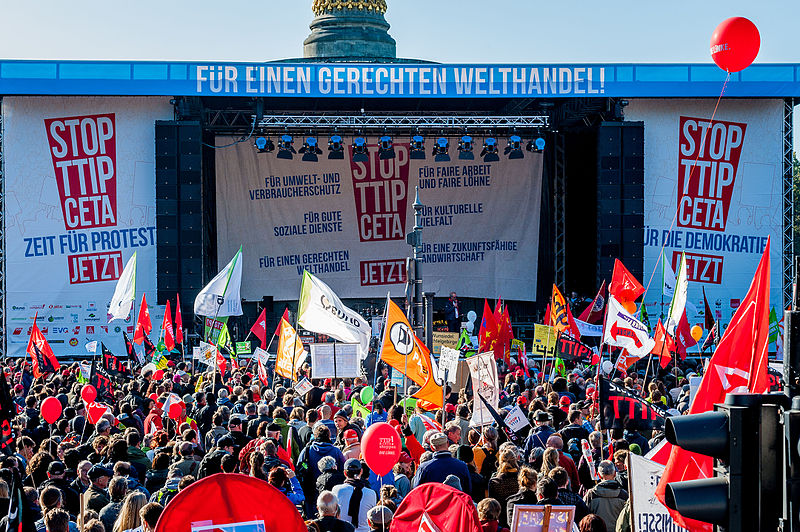 CETA -- the "Comprehensive Economic and Trade Agreement" is a secretly negotiated deal between Canada and the EU, mirroring many of the most controversial provisions in notorious deals like ACTA, TPP, and TTIP -- including the "corporate sovereignty" clauses that permit multinational corporations to sue governments in closed courts, and force them to repeal environmental, labour and safety rules (albeit dressed up in new clothes that make the provisions appear different, without making any real difference).

After June's Brexit vote, the European Commission -- justly famed as the most undemocratic, high-handed part of the EU -- tried to use the chaos of the UK's impending departure for cover while ramming through CETA ratification. Under the Commission's plan, the EU member-states wouldn't get a chance to debate CETA's provisions in their own parliaments -- instead, it would be whipped through the European Parliament and handed down as an edict to the member states, who'd have to amend their national laws and suck it up.

It's hard to imagine a more tone-deaf, idiotic response to Brexit. The Leave campaigners accused the Commission of being an autocratic, unresponsive, undemocratic institution that bullied member states without any accountability. The Commission's rebuttal? An autocratic, unresponsive, undemocratic act of bullying that would have sweeping effects on the states' most fundamental laws, to the detriment of hundreds of millions of people and the benefit of a handful of super-wealthy executives and investors.

Thankfully, the negative publicity from this gambit overwhelmed even the Commission's arrogance and killed the fast-track. The resulting "humiliating climbdown" bodes poorly for CETA's future, not to mention TTIP. As both left- and right-wing campaigners on both sides of the Atlantic have started fighting against these so-called "trade" agreements, they're beginning to crumble.

And Global Justice Now director Nick Dearden declared: "It's testament to the strength of the campaign we have built across Europe against CETA and its U.S. cousin TTIP, that the Commission has been forced to backtrack and allow national parliaments a vote on CETA."

Still, Dearden warned, "this isn't the end of the story. CETA has been slowed down, but the British government has been pushing for so-called 'provisional implementation' of CETA—which would mean bringing CETA into force now, with the idea that it can be voted on by parliaments at some future, unspecified date. That is clearly not acceptable, and we must stop the British government foisting this toxic deal on us before a vote can be held."

Pushing for provisional implementation, he said, would merely reinforce "the widely-held suspicion that the EU makes big decisions with harmful consequences for ordinary people with very little in the way of democratic process."