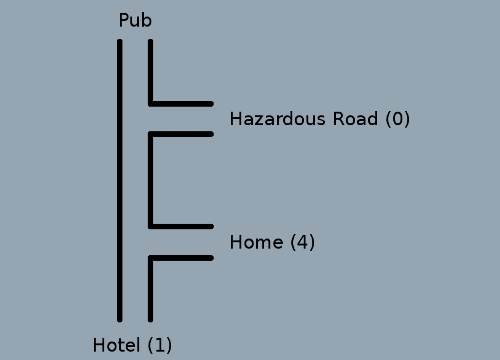 That’s twice the payoff of going straight! “There appear to be two contradictory optimal strategies, one at the planning stage and one at the action stage while driving,” writes Leonard M. Wapner in Unexpected Expectations. “At the pub, during the planning stage, it appears the driver should never exit. But once this plan is in place and he arrives at an exit, a recalculation with no new significant information shows that exiting yields twice the expectation of going straight.” What is the answer?

(Michele Piccione and Ariel Rubinstein, “On the Interpretation of Decision Problems with Imperfect Recall,” Games and Economic Behavior 20 [1997], 3-24.)

“The Bottle Imp” (1893) is a great horror story by Robert Louis Stevenson. (You might want to read it before continuing here, but it’s not much of a spoiler if you do.) Futility Closet: An Idler’s Miscellany of Compendious Amusements, by Greg Ross, describes the paradox of the bottle: In Robert Louis Stevenson’s story “The […]