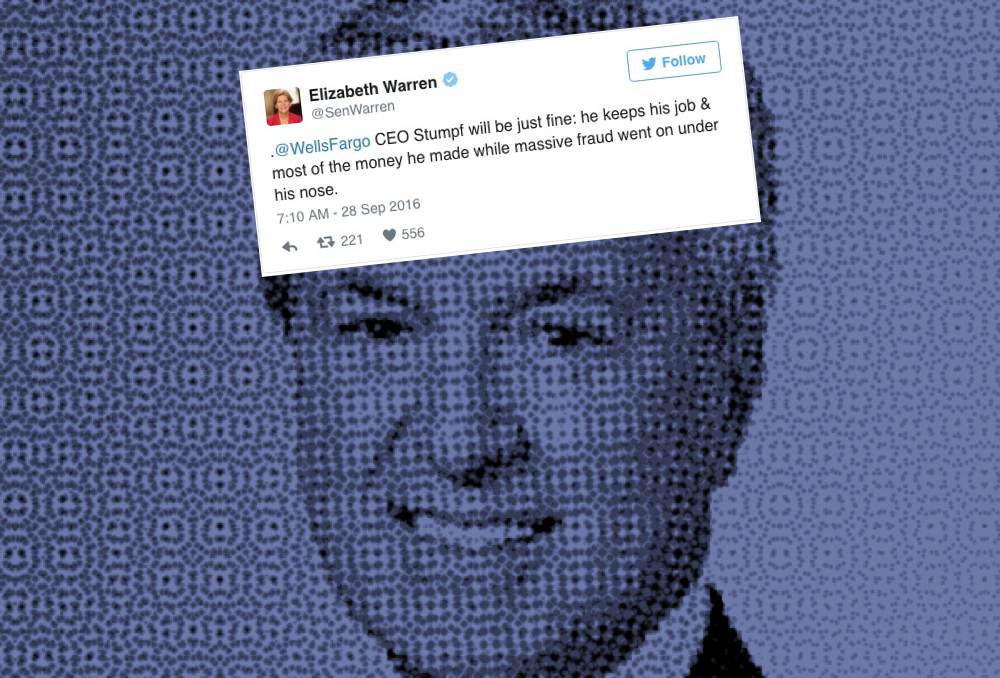 Wells Fargo's Board of Directors have finally exercised their right to claw back part of the hundreds of millions of dollars taken home by two senior executives who were compensated on the basis of the fraudulent earnings the bank took in while opening 2,000,000 secret accounts in their customers' names, taking money out of those customers' real accounts to pay for the fees and penalties accrued by the fake accounts, and trashing their customers' credit in the process.

CEO John Stumpf — who was also a major player in the subprime frauds that nearly tanked the bank and cost the taxpayers $36B in bailouts — will lose $41M of the approximately $200M he made during the fraud years from 2011 to the present (2011 is the same year that whistleblowers began alerting Stumpf to the fraud — but they were illegally fired).

Carrie Tolstedt, the erstwhile "Most Powerful Woman in Banking" who oversaw the unit where the fraud took place, will lose $19M out of the $125M, taxpayer-subsidized bonus she got when she retired at 55, a few weeks ahead of the scandal breaking (but years after the bank was warned that it was taking place).

This is hitting a few execs in the pocketbook, but more significant will be real penalties and criminal investigations, as well as the $2.6B lawsuit launched by former low-level employees who were fired when they refused to commit fraud, this being the only way to meet the unrealistic sales-targets set by the likes of Stumpf and Tolstedt.

Some analysts complained that the bank's board had been too slow to act and the response looked to be to try to appease the House Financial Services Committee, which will interrogate Stumpf on Thursday. While that may be the case, it appears more likely that influential board members (and in groups like this, some typically have more sway) were blindsided by revelations in the media, or worse, saw information that contradicted what Stumpf, other C-level execs, or the Skadden Arps report had told them (if the Skadden report was inaccurate or incomplete, it would likely be the result of management withholding information or deliberately circumscribing the scope of the inquiry so as to keep dirty laundry hidden). In other words, it seems improbable that Elizabeth Warren's blistering lectures to Stumpf would galvanize the board to act. It seems more likely that the history of his interactions with the board has led them to lose trust in him.

As we said earlier, far and away the most damning new information that has come out in the last week is the CNN report that former employees reported that they were fired for using internal ethics hot lines and other whistleblower channels to report on the scam accounts, and that a former HR official stated that the department worked with business units to trump up charges so as to create a paper trail that the employee was being fired for a performance failing, and not outing misconduct.