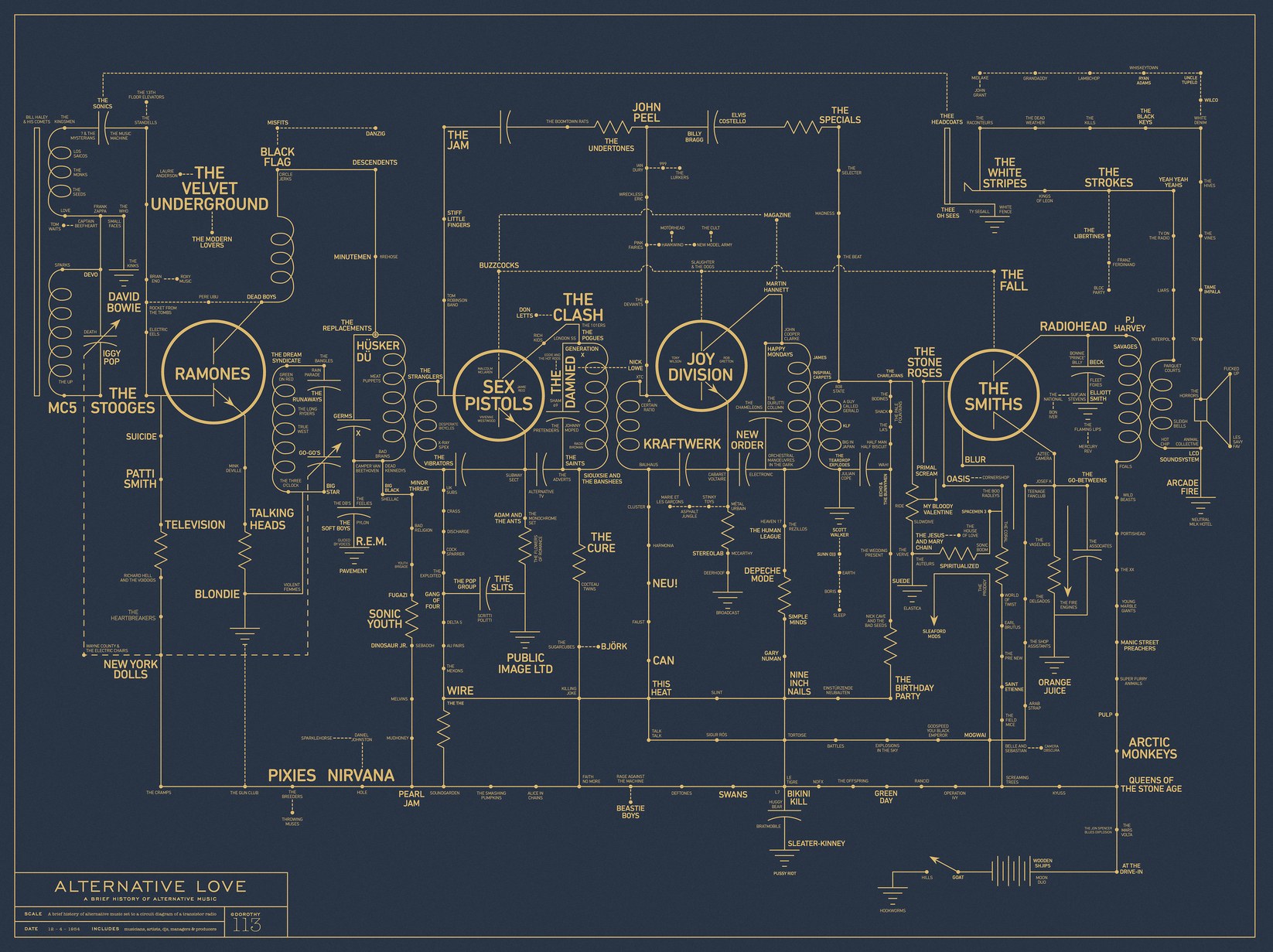 You're looking at Dorothy Studio's beautiful map of the history of alternative music, available as a poster from their website.

Our Alternative Love Blueprint celebrates over 300 musicians, artists, managers and producers who (in our opinion) have been pivotal to the evolution of the alternative and independent music scene from Bill Hayley & His Comets whose 1950’s Rock Around the Clock became the first ever anthem for a rebellious youth to the DIY ethic of present day bands like Arctic Monkeys and Radiohead.
The print weaves it way through many musical sub-genres and counter-cultures including early underground and experimental rock (The Velvet Underground), proto-punk (MC5, The Stooges), New York and CBGB’s Punk (Ramones, Patti Smith) UK Punk (Sex Pistols, The Clash) 2 Tone & Ska (The Specials) Krautrock (Kraftwerk, Can, Neu!) Hardcore (Black Flag, Hüsker Dü), Riot Grrrl (Bikini Kill, Sleater-Kinney), Post Punk and Manchester’s Lesser Free Trade Hall fall-out (Joy Division, Buzzcocks, The Fall), Grunge (Nirvana, Pixies), Alternative (The Smiths, R.E.M) Madchester (The Stone Roses, Happy Mondays) and Garage Rock Revival (The White Stripes, The Strokes). The print also salutes creative catalysts such as Malcolm McLaren and Vivienne Westwood and innovating record labels including Stiff, Rough Trade and Postcard.
Screen printed metallic gold onto a dark blue uncoated stock.

Rumors are enough for the designers at Dorothy, a studio that just released a data-viz poster called “Alternative Love Blueprint—A History of Alternative Music.” The poster ($43), like punk rock, begins with The Sex Pistols. A charted history of counter-culture rock music spills out from there, though not in any kind of linear, board game kind of way. “Taking that gig as a starting point, I tried to map out the bands who influenced each other in some way up to that point, from the early proto-punk and garage rockers, through CBGB’s era of punk,” says James Quail, the designer. “Then I mapped out where those scenes led through punk, post-punk, 2 tone & ska, hardcore, Riot Grrrl, Grunge, and so on.”