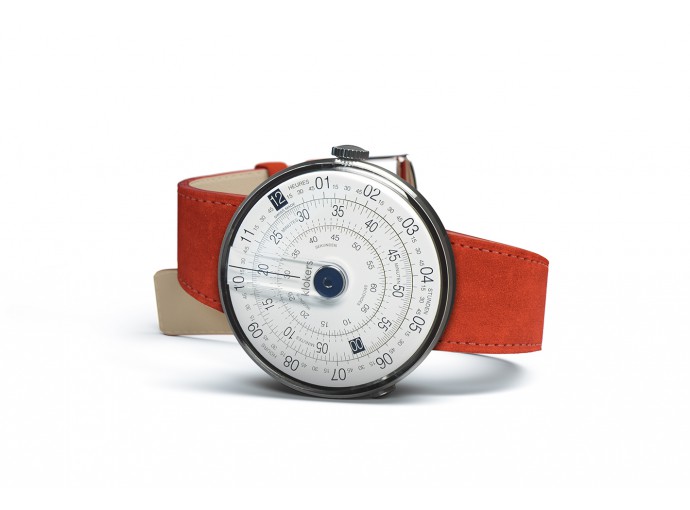 The 44mm Klok watch started life as a crowdfunding campaign and has now graduated to full-fledged article of commerce, priced between €400-430.

The watch's distinctive timekeeping methodology involves a series of nested, rotating concentric rings that tell the hours, minutes and seconds, in a manner reminiscent of a circular slide-rule.

A forthcoming iteration the €865 Klink-01, adds a half-screen and window that makes it easy to check different time-zones. All models come with a strap that features an easy on/off mechanism so you can swap movements and straps to suit your mood.

I'm a watchmaker's grandson and grew up playing with hundreds of junk movements and parts in my grandfather's apartment workshop (I still have his loupe). I'm endlessly fascinated by watches, especially mechanical pieces that push the envelope on what can be done with precision mechanisms. The Klok watches are both beautiful and functional, and cleanly integrate their aesthetic gimmick with the timekeeping function.

So here's how the Klok-01 works: there are three dials, each of them rotating with the time. Hours are on the outermost circle, minutes are in the middle, and seconds race along closest to the center. One line straight down the middle tells the time by intersecting each of the dials. It has an integrated magnifying lens, which looks like it protrudes from the watch's domed, transparent-polymer cover, but actually sits underneath it. Is this the most efficient way of telling the time? Of course not. But it sure is an enchanting way to do it.

I think a big part of the Klok-01's aesthetic appeal stems from the fact that its visual gimmick is also a functional thing. Those rotating dials feel alive with the motion of time, lending the whole watch a throwback feel that evokes overly complex inventions of human technological past. Who doesn't like the charming, fairy tale images of overelaborate gizmos that make funny noises? The Klok watch only makes the steady ticking noise of a quartz movement, but you get the idea. It's a tiny bit magical.