Are Jews people? Find out after the break on CNN 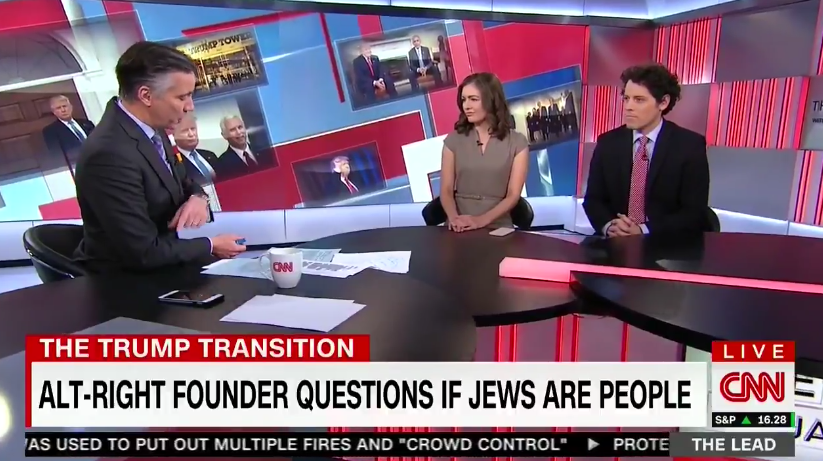 How fast things move! Here's us, suggesting that media people stop using the cutesy term "alt right" to describe Sieg Heiling white supremacists. But they're already moving onto panel discussions on whether Jews are people.

This just happened on @CNN: Are Jews People? pic.twitter.com/SZD4mr1Vqc

Fortunately, both of CNN's panelists are in favor of Jews (such as CNN chief Jeff Zucker) being people, and smile beatifically throughout their implicit condemnations of white supremacy, phrased in the form of What Trump Must Do to Repudiate It. Nevertheless, that chyron is surreal stuff. It presents a Schrodinger's shitfeast of a rhetorical question that everyone knows isn't really a rhetorical question for the people being discussed.

Its almost as if there were a cynical fatalism at hand, riding the Trump wave however long it lasts, perhaps even happy at its unexpected persistence.

Here is the segment. That chryon. These times. pic.twitter.com/5vXn5GM7ll

Meanwhile, at Trump Tower, Zucker and other media higher-ups were being dressed down by Trump himself today.

“The meeting took place in a big board room and there were about 30 or 40 people, including the big news anchors from all the networks,” the other source said.

“Trump kept saying, ‘We’re in a room of liars, the deceitful dishonest media who got it all wrong.’ He addressed everyone in the room calling the media dishonest, deceitful liars. He called out Jeff Zucker by name and said everyone at CNN was a liar, and CNN was [a] network of liars,” the source said. ...

The stunned reporters tried to get a word in edgewise to discuss access to a Trump Administration.